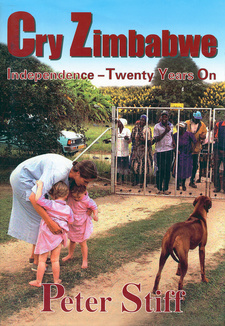 With his book, Cry Zimbabwe: Independence-Twenty Years On, late Peter Stiff delivered a harsh account on the younger history of former Rhodesia an its development after independance.

Joshua Nkomo's first reaction to the independence election results was shock. He had confidently expected victory — if only a shared one with the parties of Bishop Abel Muzorewa and Rev. Ndabaningi Sithole — but victory nevertheless. Instead, the newly enfranchised and savagely intimidated black electorate had voted overwhelmingly for their tribal roots. Robert Mugabe and his Mashona-based ZANU-PF had virtually swept the board. Joshua Nkomo, the father of Zimbabwe nationalism and once revered by the whole black population, had been rejected by all but his Ndebele ethnic grouping. Muzorewa, Sithole and their lesser Mashona allies had been ignored by the voters, if not as 'sellouts' to the whites, then certainly as irrelevants who were powerless to halt the war. Nkomo and his lieutenants believed they had been cheated, but 'felt there was nothing for it but to swallow the result and trust the alleged victors would use their triumph generously and in good faith'. How had it happened? The Rhodesians and the South Africans had anticipated that when the Conservative government under Prime Minister Margaret Thatcher took power in Great Britain on 3 May 1979, it would recognise the Internal Settlement and the government of Bishop Muzorewa. Mrs Thatcher, unlike her Labour predecessors, had made it clear that she supported the Internal Settlement, indicating unambiguously that when she became Prime Minister, recognition of Zimbabwe-Rhodesia as an independent sovereign state would follow. During a meeting with Commonwealth Secretary-General Shridath Ramphal two weeks after taking office, she described both ZANLA and ZIPRA as 'terrorists'. When Ramphal remonstrated with her, she snapped: 'Well, of course they're terrorists, they're just like the IRA.' Forty-two delegations attended the Commonwealth summit held in Lusaka from 1 to 8 August 1979. In normal circumstances it is probable, as in the past, that Great Britain, after agreeing to a few token amendments to satisfy her most vociferous critics, would have persuaded the majority of the Commonwealth to go along with the recognition. But Mrs Thatcher, by unwisely showing her hand in advance, had given the Front Line States time to lobby support for the rejection of her proposals. The Commonwealth was no longer the comfortable and friendly gentlemen's club of white-ruled states with a Westernised commonality of interests, as it had been in the old days. In fact, the Afro-Asians with the Front Line States in the vanguard were making plans to have Great Britain's status reduced to where she was just another member state, not the acknowledged leader. The British delegation suffered a hammer blow shortly before the conference opened. Nigeria, which in 1961 as the newest member instigated moves to expel South Africa from the Commonwealth because of her apartheid policies, suddenly expropriated the assets of Shell-BP in Nigeria. The directors of Shell-BP had warned the British Government in advance that this would likely happen if they recognised the Internal Settlement, but Mrs Thatcher had chosen to ignore them. Now there was the added dimension of a Nigerian threat to cut off all trade with Britain, worth three times its trade with South Africa. Commonwealth Secretary Ramphal manipulated the agenda so that plenary discussions on Zimbabwe-Rhodesia were deferred for three days. In that critical period Mrs Thatcher was subjected to intense pressure, the nub of which was that if Great Britain granted recognition to Zimbabwe-Rhodesia, it would be expelled from the Commonwealth. Mrs Thatcher knew only too well that no further assistance was available on the Rhodesian question from lame-duck American President Carter and his Secretary of State, Cyrus Vance.  [...]

This is an excerpt from: Cry Zimbabwe. Independence-Twenty Years On, by Peter Stiff.