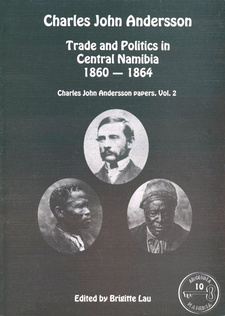 From the diaries and correspondence of Charles John Andersson, Brigitte Lau scetches the state of trade and politics in Central Namibia during 1860-1864.

The author of the present record, Charles John Andersson, is not unknown among students of Namibian history, or Africana book collectors. He was born in Vanersborg (Sweden) to a Swedish mother (Kajsa Andersdotter) and an English father (Llewellyn Lloyd) in 1827. His papers record at least six siblings: Marie, Sophie, Henrietta, Joseph, Wilhelm and Philip. After a short spell at the University of Lund in 1847, he left to hunt and trade with his father. In 1849 he sailed to England from where he planned to take up a life of hunting and exploration In Iceland. However, meeting Galton and being Invited to accompany him to South Africa. Andersson changed his plans, and in early 1850 the two sailed for Cape Town. For a decade, interrupted only by two years In England and one year as manager of the Matchless copper mine, he travelled and hunted for Ivory in south-western Africa, visiting King Nangolo in Ondonga, exploring Lake Ngami and even reaching the Okavango River. By 1860 he had set himself up as the principal trader in central Namibia, purchasing the WBMC's assets in Otjimbingwe and fitting out a number of hunter/traders to bring in oxen and ivory. His financial situation - probably in many aspects similar to that of other European traders - remains obscure. No doubt he returned from his explorations of Lake Ngami with a fortune in ivory, stock and other saleable goods. Furthermore, the publication of his book, 'Lake Ngami', was an immense success; there were intimations of Cape civil service posts offered him until at least I860, and he was courted by British officials and scientists for his then highly interesting and precious map of the interior of southern Africa. Between 1856 and 1860 Wallis records a series of major cash outlays for fitting out hunters and traders and especially his partner Green; however, no details concerning the exact nature of these 'partnerships', nor the returns of these outlays, could be traced. Wallis claims that the establishment in Otjimbingwe, set up only five years after his return from Lake Ngami, was based partly on credit and in spite of the fact that Andersson recorded the huge sum of £20.000 as due to him in April and May 1864, by September of that year he was in financial difficulties and a few months later seems to have been a pauper. For reasons which this editor could not exact it seems that the Cape-Namaland cattle and ivory trade held the constant promise of immense profits to be made; yet it was precarious enough to ruin a trader's fortunes within months. The next four years are traced in detail by the present record; Andersson's trading activities in the early 1860s, marred by the spreading lungsickness epidemic, soon brought him into direct conflict with the Namaland chiefs and especially the sovereign, Jonker Afrikaner (succeeded by his sons, Christian and then Jan Jonker, following Jonker's death in 1861). By 1864, immobilised by a nasty leg wound received in battle against the Oorlam Afrikaners, Andersson's career as a trader came to a near standstill. [...]

This is an excerpt from the book: Charles John Anderson: Trade and Politics in Central Namibia 1860-1864, by Brigitte Lau.

Namibia in Jonker Afrikaner's Time is a study entirely founded on sources found in various Namibian and South African archives.

Three views in the past of Windhoek

Three views in the past of Windhoek focusses on very interesting aspects of local history.

The Matchless Copper Mine in 1857

This documentation consists of the correspondence of the manager of the Matchless Copper Mine in 1857, C.J. Andersson.

The original Zoo Park architecture (1887-1958) has vanished. The Zoo Park is located in the center of Windhoek, this is its history documentation.

The diaries of Carl Hugo Hahn 1837-1860, this Volume 5 includes registers and indexes only.