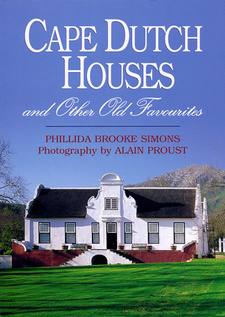 Among the cape dutch houses described by Phillida Brooke Simons and Alain Proust are the buildings on wine farm Lekkerwyn.

Translated freely, 'Lekkerwyn' means 'delicious wine', and appropriate as this may seem to a farm in the winelands of Groot Drakenstein, it is actually a corruption of the name of its original owner, a Huguenot named Henri (or Ary) L'Ecrevent. He was granted his farm, 60 morgen in extent, in 1690, and its position between the meandering Berg River and the mountains above Groot Drakenstein must have seemed idyllic when he settled there. L'Ecrevent would have built some sort of modest cottage for himself, his wife and their children. What he planted or reaped is unknown, but he had only a few years in which to enjoy the fruits of his labours for, on 7 July 1697, he died a violent death at the hands of Hans Silverbach, the owner of the neighbouring farm, Zandvliet. Fearing a harsh sentence in those ruthless times, Silverbach abandoned his wife, a freed slave woman, and disappeared for ever. He was declared a fugitive - veldvlugtig en vogelvry was the official term - and Zandvliet was confiscated. During the next half century, changes in the ownership of Lekkerwyn, Zandvliet and a third neighbouring house named Meerust - or Meerlust - became extremely complicated. Parts of the various farms were deducted and combined with sections of the others, a portion of Zandvliet becoming Delta, a name that it retains to this day. However, by the mid-eighteenth century, Lekkerwyn belonged to Sybrand Vermeulen; Delta was owned by Cornells Brink; and Meerust was the property of Jan de Villiers of Boschendal. On Lekkerwyn a T-shaped homestead was built at about this time, one assumes by Sybrand Vermeulen, and parts of the original woodwork still remain.

Almost a century later a gable was added, and with its wavy outline,  small pediment and four pilasters - the outer pair with inverted scrolls at the base, the inner two now bereft of their crowning urns - it is typical of the late neoclassical style. Do/ J 1834, it was most probably built by Jacobus Stephanus de Villiers, owner of Lekkerwyn from 1806 until 1850. Towards the end of the nineteenth century, Lekkerwyn, Meerust and Delta became the property of a young Englishman named Harry Pickstone who had arrived at Cape Town in 1892 with letters of introduction to several prominent men of the day. Pickstone had spent the previous two years familiarising himself with the fruit industry of California and, dedicated to the ideals of the British Empire, was convinced that fruit could be grown with equal success in the Cape Colony.

He became associated with C.J. Rhodes who, inspired largely by the young man's enthusiasm, established the Rhodes Fruit Farms in the Groot Drakenstein area in 1898 and appointed him general manager. Pickstone began by planting a nursery of fruit trees at Nooitgedacht outside Stellenbosch and was later instrumental in selecting the farms that were to be incorporated into the scheme. At this time, scant importance was attached to the Cape's noble old homesteads, but both Rhodes and Pickstone were determined to preserve what they could of this priceless heritage. In 1907, Harry Pickstone brought his young American bride, formerly Louisa Hoof May to Lekkerwyn where he planted six palm trees to celebrate his marriage. On the birth of their son, he planted another half dozen; then a further six when Louisa came of age; and finally six at Delta to mark another special occasion.

These palm trees, now regally tall, have become a landmark in Groot Drakenstein, and an aesthetic link between the whitewashed homestead at Lekkerwyn and the grandeur of the mountains surrounding it. Pickstone's association with Rhodes brought him into close contact with the architect Herbert Baker, who had recently completed the restoration of Groote Schuur. In 1906, Baker designed a double-storeyed wing for Lekkerwyn and in this addition there is a recognisable family likeness to the interior of Rhodes's Rondebosch mansion. In Lekkerwyn, there is evidence, too, of the gratitude shown by local farmers for Harry Pickstone's contribution to the fruit industry. One of the homestead's beautiful front doors was given him by Senator Daniel Retief who had removed it from his homestead at Welvanpas, Wellington. Another gift was a magnificent cast-iron fireback dating back to the seventeenth century.

Lekkerwyn, together with Meerust and Delta, remained in the Pickstone family until the 1990s, when the latter two properties were sold. Today, Lekkerwyn, splendidly furnished and still owned by Harry Pickstone's granddaughter, offers bed-and-breakfast accommodation to visitors to the lovely Groot Drakenstein Valley. Together with the French Huguenots, and particularly the De Villiers family the names of Harry Pickstone and C.J. Rhodes will always be associated with the development of the fruit industry in the Franschhoek-Groot Drakenstein Valley.

This is an excerpt from the book: Cape Dutch Houses and Other Old Favourites, by Phillida Brooke Simons and Alain Proust.