By command of their Lordships. The exploration of the Namibian coast by the Royal Navy, 1795-1895, by Jill Kinahan. 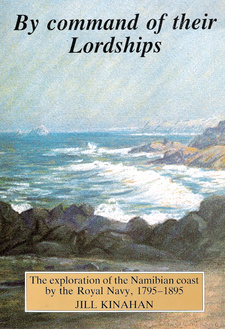 By command of their Lordships. The exploration of the Namibian coast by the Royal Navy, by Jill Kinahan, makes available for the first time verbatim extracts from original remark books kept by officers of the Royal Navy during investigation and survey of the Namib coast between the years 1795 and 1895.

The remarks, kept while under sail, record wind, weather, currents and hidden dangers; they describe the coastline, anchorages, and any natural or human resources that might benefit a ship. Each ship's captain tested both knowledge and rumours about the coast during the voyage, and offered reasoned conclusions on the reliability of former reports. The older remarks, recorded in elegant and measured prose, are the most fascinating. As early written descriptions of the dramatic wonders of the Namib coast, they breathe the awe and desolation felt by the captains whose responsibility it was successfully to complete the voyage. Quite apart from their eloquence, observations made by these trained and practised officers have considerable academic interest. They chronicle the hydro-graphic survey of the Namib coast, and form a valuable source for toponymy. They yield information on Namibia before the penetration of merchant capital; during the exploitation of coastal resources; the upsurge of trade and gun-running; the upheavals of the interior, and the reluctant attempts at British colonisation, focusing on Walvis Bay. They offer also an intimate and immediate view of nineteenth century life on board a ship of the Royal Navy, which aids understanding of colonial policies and attitudes. Taken together, they offer a diachronic perspective, albeit patchy, on fluctuations in the populations and distribution of marine animals. The idea of keeping remark books was advocated as early as 1760, when the Lords Commissioners of the Admiralty, concerned about the lack of maritime information to assist the navy during the Seven Years War with France, issued a letter regarding the provision of hydrographic information (Day 1967: 338). In 1804 the practice of all HM ships keeping remark books was instituted (Ritchie 1967: 93). Prior to the appointment of Alexander Dalrymple as First Hydrographer in 1795, and the establishment of the Hydrographical Office, it had been customary for captains of both naval and merchant ships to make what surveys they could of the coasts they visited. These surveys were often published by commercial chartmakers. However, not all captains regarded it their duty to record their opinions on the tracks they followed at different seasons of the year, and only after the Hydrographical Office was officially established with the express purpose of publishing and distributing charts to the Fleet, did the value of these remarks slowly come to be appreciated (Ritchie 1967: 93). Condensed and systematically ordered, these written directions became a valuable aid to navigation, later published by the Admiralty as manuals of sailing directions periodically updated. Many of the remarks reproduced here were the results of surveys specifically ordered by command of the Lords Commissioners, who controlled all naval operations. In 1984 John Kinahan and I conducted an archaeological field survey of the IKhuiseb Delta and vicinity, recording more than 200 sites. These coastal sites represent a two thousand year sequence, evidencing early settlement in the delta; the rise of the indigenous pastoral economy; contact with European visitors to the coast, and the eventual collapse of Namib pastoralism (John Kinahan 1991). While a Visiting Fellow at the University of Leicester, England, John Kinahan commenced attempts to locate primary documents recording eighteenth and nineteenth century exploration of the Namibian coastline which might inform and complement the archaeological material. From the Africa Pilot (1868), the first edition of the Admiralty manual of sailing directions to the coast of Africa, he compiled a list of ten Royal Navy vessels which investigated the Namib coast during the nineteenth century. Following leads from his English colleagues, he established that the original remark books are housed at the archives of the Hydrographic Office in Taunton, Somerset, while ships' logbooks, together with other Admiralty documents, are in the Public Record Office at Kew. At the time it was not possible to visit Taunton, but we were able to assess the ships' logs in the Public Record Office as sources of historical information. [...]

This is an excerpt from the book: By command of their Lordships. The exploration of the Namibian coast by the Royal Navy, 1795-1895, by Jill Kinahan.