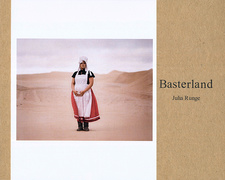 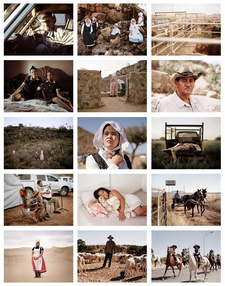 These images are taken from photographer Julia Runge's book 'Basterland'.

The virtually constitutive meaning of the Baster history, which has been fought for time and time again, is the central theme of Julia Runges book: The past lights up in the present, but precisely this past was meant to constantly be protected from the present which in turn, in form of the current state of Namibia, appears to show little interest in the cultural legacy of the Baster. Last but not least the merit of this photo series 'Basterland' lies in reminding us of a forgotten episode of German colonial history.

After the Dutch occupied the Cape of Good Hope in 1652, a population of mixed origin emerged, descendants of white men and Khoi-San-women, a. o. the Basters. "Baster", the Afrikaans term for people of mixed race, is what they have adopted as their own name. In 1870 a group of Basters settled down in the midst of then South-West-Africa at Rehoboth and the surrounding region, the "Rehoboth Gebiet". Led by Kaptein Hermanus van Wyk, for two years they had trekked out of the South African Cape Colony to the north. Situated 80km south of Windhoek Rehoboth today is a multi-cultural small town of approximately 30,000 inhabitants, a kind of Namibia on small scale. Ecologically the region can clearly be classified as semi-arid with virtually no open standing water.

The Germans declared South-West Africa (SWA) as their protectorate in 1884 and concluded one year later the Treaty of Protection and Friendship with the Basters, -starting a phase of cooperation, which became increasingly difficult until 1915. The Basters had arrived here as pastoralists and have remained so ever since. Animal husbandry, i.e. stock-breeding, namely cattle, sheep and goats, dominate their farming. But in contrast to all other indigenous groups, by the end of the 19th century, the Basters decided to switch from communal to private land tenure as a way of securing their territory against the land grab of the Germans. The Baster-German "relationship" had advantages and disadvantages: For about 10 years between 1895 and 1905 the Kaptein and Council of Rehoboth allocated "dowry-farms", "gift-farms", to couples of "mixed" marriages. This practice stopped after the German administration of SWA had introduced a ban of "mixed" marriages in September 1905. Afterwards all German husbands faced infringements of their civil rights. After 20 years of more or less loyal cooperation, the Basters turned against the Germans, by deciding not to fight against the British South Africans, under whose regime the Basters had long lived. Both clashed in SamKhubis on 8 May 1915, about 70km southwest of Rehoboth. The event is remembered each year by the Baster community.

Between "White" and "Black": a Situation of Inbetweeness

The Basters have never been a group easily directed. Letters of protests directed at the German emperor, the German colonial administration, open protest against their own or fight against foreign authorities (1915, 1925), petitions to the British king, the Cape government or the League of Nations - or later the United Nations - the list of their protests can be followed to the present day (1990, 1992/1995). This attitude of protest is part of their longstanding experience of living and surviving in a situation of in-betweeness. The shaky standing between whites and blacks forged the Basters cultural unity very early, always longing for the opportunity for comprehensive self-determination. On the other hand, there were always times of adjusting themselves to the current ruler or system, which can be seen, even misunderstood, as cooperation: but they just not had another choice.

The Basters after the Independence of Namibia

The Rehoboth Basters, previously the dominant and ruling group in Rehoboth, have lost influence after the Namibian Independence, - also because they make up a percentage of 2.2% of the total Namibian society today. Simultaneously their Gebiet ceased to exist as a territorial and cultural entity: it was incorporated into the two new regions of Hardap and Khomas. Their traditional leaders had been left powerless, just as Kaptein Hans Diergaardt. He died in February 1998. One year later John McNab was appointed as newly elected Kaptein, not acknowledged by the state until today. That's why many Basters have bad feelings against the Namibian government. [...]

This is an excerpt from the book Basterland, by Julia Runge.