Aidsafari: A memoir of my journey with AIDS, by Adam Levin 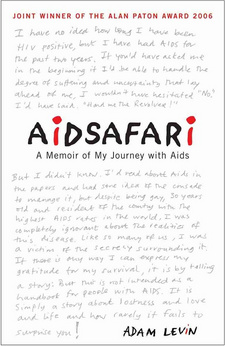 Aidsafari: A memoir of my journey with AIDS, by Adam Levin.

This is Adam Levin's preface to his book Aidsafari: A memoir of my journey with aids.

I have no idea how long I have been HIV-positive, maybe five years, maybe less, maybe more, but I have had Aids for the past two years. When I disclosed my status to my parents they assured me that I wouldn't have to worry about the cost of treatment and that they would remain at my side on the journey that lay ahead. Few people are so blessed. The majority of people with Aids struggle not only with the disease, but with its exorbitant financial pressures and cruel social stigmas. I have suffered none of that. I have not been shunned by the people around me (okay, maybe a couple, and you know who you are); I have not had to worry about access to anti-retrovirals; and I have been surrounded with love and care. And yet, this has undoubtedly been the most difficult journey of my life. If you'd asked me, in the beginning, if I'd be able to handle the degree of suffering and uncertainty that lay ahead of me, I wouldn't have hesitated in my response. 'No, it's far too much,' I'd have said. 'Hand me the revolver.'

But I didn't know. With the generation before me already tragically lost, my own generation had buried its head in the sand. I read daily about Aids in the newspaper. I knew the extent of its spread and had some grasp on the politics of the crusade to manage it. And yet, despite being gay, thirty years old, and a resident of the country with the highest infection rate in the world, I was completely ignorant about the realities of this disease. I was bang in the epicentre of the Aids pandemic, and yet, if you'd asked me what Aids was really about on a daily basis, I wouldn't have known what to say. I had no sense of the experience of the progression of this disease. I was clueless as to the degree of pain and anxiety involved. Like so many of us, I was a victim of the secrecy and ignorance surrounding what has become the world's most pressing concern.

Often while writing this memoir, I lost faith in its process. I wrestled with the egotism of writing sixty thousand words about myself, and I doubted its value. Many times, I abandoned the whole idea. But as unfortunate as the story of my suffering might be, the circumstances surrounding it have been extremely fortunate. The angels of care and affirmation have always been close at hand, and whatever doubts I still might have as to the significance of this manuscript, if there is any way I can express the depth of my gratitude for that support, it is by telling a story. And this is it.

When I first got sick, I looked for books that might prepare me for the journey ahead of me. I looked in the bookstores, I surfed Amazon, and yet I found nothing. This was no accident. In its own insidious way, the conspiracy to keep this disease walled in silence had triumphed. If this memoir helps to chip away at a single brick of that immense wall of silence, I will be greatly honoured. If my story can be of any solace or assistance to anyone battling the rigours of this disease, or to any of the people close to him or her, it will be my privilege to offer that. But this is not intended as a handbook for people with Aids: on a deeper, more intimate level, it is simply a story about lostness and love and life and how rarely it fails to surprise you.

At times, I also struggled with the fears of personal exposure and worthlessness surrounding the publication of this book. But when I finally accepted that this unextroardinary story was possibly one worth sharing, finishing this book proved one of the easiest things I'd ever done. It proved a far less complicated endeavour than either of the collections of journalism I had published or the novel I was working on - the characters of which would yank me out of bed at 4:30 in the morning, demanding that I hobble over to my laptop and inform them where on earth I was leading them.

In the end, there is nothing simpler than telling a story when it is yours alone. Probably the trickiest part in the whole written journey was choosing a title. I knew that I wanted to make this memoir as accessible as possible, because, ultimately, if it didn't reach people there would have been little point in writing it. And yet everything I came up with seemed either so dumb-assed obvious or nauseatingly soppy, I couldn't imagine putting my name beneath it. And so I began bothering everyone around me for their responses to any vaguely possible option. I'd been stuck on '2' for a while - my miserable, rock-bottom cell count when I first tested positive. It captured the tragedy of my own denial and the almost fatal progression of the HI virus within my body as a result of that process - at one point, 429000 copies of itself within each tiny cell.'2' also evoked the idea of a second chance and a new beginning, but, as my darling friend Alex so astutely observed,'2' seemed glaringly inappropriate for a journey that had been so distinctly solo.

My editor had come up with the phrase 'Still Life with Aids'. I played with the words. 'Still! Life with Aids.' It captured the amazing resilience of my journey, the merciful possibility that one could have Aids and still be here. And yet there was something eerily frozen about the phrase. For this had been a journey from paralysis to gradual agility. A story about learning to walk again, to move, to do things for myself. A terrified crawl from the door of death back into the great wide world of life. 'Aids shmaids!' my friend Roy suggested. 'Yeah,' I figured. 'But that makes it sound like it's all been a big joke, but it hasn't; it's been fuckin' hectic!'

'There's your title,' Roy said. 'Fuckin' Hectic.' It was pretty damned good, but still didn't quite capture a journey that had been so profoundly personal. So I lay back and I thought. I reflected on all the miraculous but exhausting African journeys of wonder I had chronicled in my first book The Wonder Safaris. I thought of that beautifully lyrical Swahili word for journey: 'safari'. And I realised that the hardest, most frightening safari of all had been the one that had not required a single step. It had been the journey in my head and through every aching nerve in my body.

This is the preface to the book: Aidsafari, a memoir of my journey with aids, by Adam Levin.

Aidsafari: A memoir of a South African homosexual's journey with AIDS.

So stirbt man in Afrika an Aids

Living and Dying with AIDS in Africa

New Perspectives on an Modern Disease

Seven Letters tells the stories of Namibian children infected by or in conflict with HIV/AIDS.