A History of Namibia, by Marion Wallace and John Kinahan 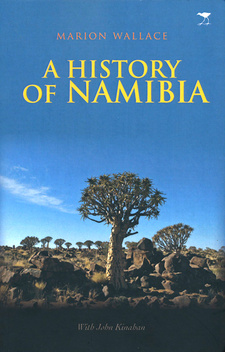 Marion Wallace' and John Kinahan's first modern history of independent Namibia takes its small, ethnically diverse, largely pastoral community in a vast piece of Africa, through colonialism, dispossession and war to the birth of a stable nation state.

On 1 January 1894, Theodor Leutwein arrived in SWA to replace Curt von Francois as the head of the colonial administration (rudimentary as it was). The balance of power was now to swing decisively in favour of the colonisers for the first time. By the end of 1896 Leutwein had quelled immediate opposition to German occupation, concluded agreements with those groups that had previously held aloof from Goring and von Francois, and begun to set up the structures of colonial rule. In the following year, African pastoralists were devastated by the epidemic of rinderpest. Thus the conditions for colonial development were created: for the first time, German settlers arrived in South West Africa in some numbers, and an infrastructure of roads, railways and harbours began to be created. The costs of this enterprise were devastating, however, to Africans in the Police Zone (as central and southern Namibia was now redefined by the Germans). They lost much of their political power and autonomy, and suffered losses of land, water and grazing rights. A decade after Leutwein's arrival, most of the African groups in the Police Zone took up arms in the Namibian War, and were answered with genocide. Although Leutwein's most important goal after his arrival in SWA was to defeat the Witboois in battle, he aimed first at an easier target. A German had recently been killed in the territory of the Khauas people at Gobabis. When Leutwein demanded the handing over of those responsible for the killing, the kaptein of the Khauas, Andries Lambert, refused. Leutwein took this, along with other 'offences' and a general reputation among the Khauas for lawlessness, as grounds for armed intervention and, with a hundred troops at his back, arrested Lambert. In March 1894 he negotiated a settlement under which the Khauas recognised German sovereignty, Lambert remained kaptein and the polity was left more or less intact. However, this was soon to change: Lambert and most of his people were caught trying to escape from the Germans, and this time the kaptein was court-martialled and executed, the people disarmed and much of their land and cattle confiscated. These events also persuaded Simon Kopper, leader of the pransmann people at Gochas (south-east of Mariental), to sign a protection treaty with the Germans-something he had hitherto strenuously resisted. Leutwein's success in bringing the Khauas and Fransmanns under control not only provided an immediate demonstration of German power, but also helped to provide security for the German forces in their planned campaign against Hendrik Witbooi; at this time the Germans also established a chain of small and isolated garrisons in the south. This accomplished, Leutwein delayed further in taking on Witbooi's well-armed and experienced commandos and agreed to a two-month truce, lasting until August 1894. Both he and Hendrik Witbooi saw this as a chance to strengthen their forces. During this time there was a surprising degree of contact between the opposing sides, with Witbooi women washing German soldiers' clothes in return for tobacco and coffee. At the same time, Witbooi and Leutwein were arguing over the question of sovereignty through an extensive correspondence. '...[T]he rulers of different countries and kingdoms make treaties as brothers', wrote Witbooi on 21 May, 'to live in peace, and to confer on great and weighty matters affecting their nations and peoples. Yet each ruler stays on his land and among his people as their autonomous chief. To which Leutwein succinctly replied: 'The real issue is that there is a captain in Namaqualand who believes he can do as he will, when Namaqualand is a protectorate under His Majesty the German Kaiser'. Hendrik Witbooi's hopes of remaining independent were destroyed by a short military campaign between 27th August and 5th September. Although the results of the fighting were inconclusive, Witbooi offered a conditional peace, which Leutwein accepted. [...]

This is an excerpt from the book: A History of Namibia, from Marion Wallace and John Kinahan.

This study, focussing on the pastoral nomads of the Central Namib Desert, presents a new and challenging approach to the precolonial history of Namibia.

From Landesmuseum to National Museum of Namibia

From Pre-historical Times to Independent Namibia