Trygve Cooper about Malcolm Bertoni's book on the Sperrgebiet of Namibia 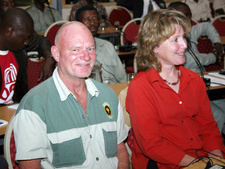 Trygve Cooper about Malcolm Bertoni's book on the Sperrgebiet of Namibia.

Trygve Cooper was the former Chief Warden of the Sperrgebiet National Park, in Namibia. Here is his introduction to Malcolm Bertoni's latest book.

For the best part of a century, many men and women have been attracted to the Sperrgebiet, and explored it extensively, mapped it, mined it, produced books and publications on specific issues, researched various aspects of the palaeontology, the history, the geology, the unique fauna and flora, even becoming experts acclaimed both locally as well as internationally in one or other field. Some have simply just fallen under its spell and either don't want to leave, or they return to the area again and again for a dose of indescribable magic, for another soulful look at some of the most pristine and varied landscapes on Earth, for a renewal of spirit. Malcolm Bertoni has done most of the above. He has maintained a fascination for the Sperrgebiet ever since he was stationed there as a diamond miner in his youth. More than that: I believe he is actually unashamedly in love with the place, with a passion that I easily understand, since I suffer from the same dilemma. Nor is his interest and knowledge confined to just one or two subjects concerning this fascinating stretch of desert; he has researched and experienced a broader variety of aspects contained within its landscapes than most people have. The recent past has seen the proclamation of the Sperrgebiet as a National Park, and it is my wish that some of Malcolm's fascination and passion for the area will rub off onto the reader as you experience its wonders through all the knowledge contained in this book. What a contribution to Namibian literature, and it all comes straight from the heart. Trygve Cooper.