Words in season, by Olive Schreiner 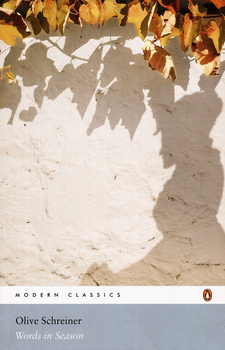 Olive Schreiner's 'Words in season' includes 'The Political Situation', written in collaboration with her husband in 1895; her 'Words in Season' produced on the eve of the second Anglo-Boer War in 1899; and her 'Closer Union' booklet of 1908 which defines her vision of a non-racial, non-sexist South Africa of the future.

The Forefathers: Silk Stockings and Snuffbox

In the heart of London City, where the roar and beat of feet rush up and down, there lies a quiet ground. Soft, young, green trees wrave there; a path runs down the centre, and an old man in gorgeous coat keeps watch there. Here sleep the celebrities of the old Dissenting World, and genius is taking its rest here - old 'Pilgrim's Progress' with his head upon a stone, staring up at the murky London sky; poor Christian with the burden on his back kneels at his side - Daniel Defoe lies here, with an obelisk nine feet high raised by the girls and boys of England - Dr Watts sleeps to the left; one fancies the little bees must always be humming about his grave. Here repose many quiet and respectable citizens; one who had dropsy and who was tapped many times, the old stone says. To the left of the Grave Yard is a factory, but the faint hum and roar that comes through the thick walls seem to add to the stillness of that place where our forefathers are taking their sleep. Under one young tree is an old stone; if you touch it, it crumbles; if you bend down to read you will make out that here lie the remains of the Rev. Samuel Lyndall; also, if you bend down very closely, of Rebekah Lyndall, his wife. This Samuel Lyndall, when in the flesh, was a parson, a stern Nonconformist, and officiated at a chapel in Old Jewry. Of his father little is known but one scene in which he stands forth suggestively to the eyes of his descendants. The boy Samuel was left alone one Sunday, the rest of the family having gone to church. He went out, and borrowed, hired, or otherwise obtained, a donkey. This he rode. The donkey deposited Samuel on the ground, breaking his collar-bone; he was taken home, nursed and recovered, doubtless thinking that his sufferings had atoned for his sin. But not so. Upon the scene appears the great-grandfather armed with a cane. 'Samuel, my son, you have broken the Lord's Day; now you have wholly recovered I shall flog you for it and he flogged him. So, cane in hand, stands the great-grandfather before us. That flogging and others seem to have been efficacious, for Samuel grew up in the footsteps of his father. As before said, he became a parson; he compiled a hymn-book; he wrote hymns, notably one: 'Ye angels who stand round the throne', which his descendants had to learn. He married a wife and begat sons and daughters, and when she died he buried her in Bunhill Fields and took another wife, and begat more sons and daughters. That was a sad house where the children grew; it faced St John's Church in Hoxton. Psalm-learning and catechism on Sundays, cold meat and sermon; odd-looking little boys marched up to the top of the house to pass the day on bread and water for having 'laughed on Sunday'. The eldest son, James, had a flogging schoolmaster as well, a man named Taylor. They flogged him at school and they flogged him when he got home. At last he ran away to sea, and was never heard of again. [...]

This is an excerpt from the book 'Words in season', by Olive Schreiner.

Words in Season is a selection of Olive Schreiner's uncollected writings on key South African issues, supported by her own autobiographical pieces.

'The Story of an African Farm' was Olive Schreiner's international coming out as a author as early as 1883.

The story of an African farm is Olive Schreiner's famous autobiographical novel takes place in the remote Karoo at the end of the 19th century.

The Story of an African Farm

The novel The Story of an African Farm details the lives of three characters and inhabitants of a Karoo farm in South Africa in the 1880s.

Under the Southern Cross. Short Stories from South Africa

Under the Southern Cross, an anthology of short stories, provides a wide-ranging introduction to South Africa.