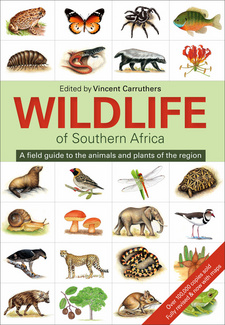 Vincent Carruthers's universal guide to wildlife of Southern Africa was the the first field guide to combine the animals and plants of the region in one easy-to-use volume.

Literature on the wildlife of southern Africa is extensive, and field guides are available for almost every group of plants or animals. However, a trip to the bush or a backpacking hike may require a small library of publications if one is to study the tremendous variety of nature that might be encountered. The Wildlife of Southern Africa attempts to resolve this problem by providing a simple, single-volume field guide to species that might be seen. People with particular interests, such as birding, will doubtless use their specialist field guides, while this book will throw light on a wider range of the myriad life forms that are inevitably exposed. For serious naturalists, and even professional scientists, it is hoped that the book will serve as an elementary field reference for observations that can be substantiated later in more formal works. For gardeners, farmers, teachers and hikers this book is intended to enhance their knowledge and enjoyment of their surroundings.

Comprehensive coverage of all the tens of thousands of species in southern Africa is clearly impossible. However, The Wildlife of Southern Africa is intended to ensure that the organisms most likely to be encountered will be identifiable and that descriptions are precise enough for confident identification.To achieve this aim, several techniques and principles have been adopted:

The book is divided more or less into halves, one dealing with animals and the other with plants. Animals are dealt with in accordance with zoological classification (see box): the vertebrate animals (fish, frogs, reptiles, birds and mammals) are classified and described at the level of species, while the invertebrate animals, because of the thousands of species involved, are described to the level of families or genera, except where individual species are so distinctive that specific descriptions are possible, e.g. butterflies. Note that the chapter dealing with lower vertebrates deals briefly with many thousands of species in six classes and four phyla, whereas a separate chapter is devoted to each of the five vertebrate classes: the emphasis is given to the larger and more conspicuous animals, as these are more likely to be of interest to the reader. In botany the basic unit of classification is - as in the case of vertebrate animals - the species. [...]

This is an excerpt from: Wildlife of Southern Africa, by Vincent Carruthers.