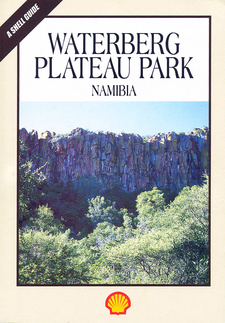 The following text is a an excerpt from the history chapter of the Shell Guide to the Waterberg Plateau Park Namibia, written by Ilme Schneider.

At the beginning of the century, a battle of tremendous historic importance took place at the Waterberg between Herero warriors and German colonial forces. The brave Herero fighters suffered a bitter defeat in their struggle to rid themselves of colonial rule. In latter-day Namibia, the Waterberg is a tranquil nature reserve which has not only been planned with foresight, but is a symbol of harmony and an asset to the country as a whole. The Waterberg, known as Omueverumue in the last century, which is the Herero word for "narrow gate" between the Kleine and GroBe Waterberg, is an area of unique beauty. This pristine wilderness is still largely unknown to the public and has a variety of birdlife, flora and fauna which is probably unequalled in Southern Africa. The fountain, formerly known as Otjosondjupa, means "the place of the calabashes" which were planted there by Herero, Damara and San people in earlier times. After the Battle of Waterberg, German settlers established fruit plantations there with more than 3 000 trees which supplied the entire country with citrus fruit. Today, this site, which is situated below the striking russet and grey-blue cliffs, is a rest-camp for nature lovers. The whole of the GrofBe Waterberg Plateau and parts of the foothills and plains below were declared a nature reserve in 1972, and is now known as the Waterberg Plateau Park. Rising above the surrounding thornbush savanna like an island, the Waterberg has the characteristic table-mountain silhouette. The most south-westerly section of the dry woodland which covers the northern Kalahari and the Caprivi, occurs on this plateau. At its slopes there are bountiful fountains and at the foothills there extends the endless, dusty and dry thornbush savanna. This inhospitable, waterless region of Omaheke gained in notoriety during the Herero war, and extends over the endless horizon towards Botswana in the east. On the plateau, in an easterly direction, there are fossilised dinosaur tracks from geological periods long past, and engravings of animal tracks on a rock slab at Karakuwisa, the highest peak of the Waterberg. Geologically, the Waterberg is a remnant of a depression that was covered by up to 300 m of sand during the Karoo Sequence. It is from 180 to 200 million years old, and solidified as Etjo Sandstone. It was then lifted by tectonic movements and then eroded again during the last 100 million years. What remains of it today are the Waterberg, Mount Etjo which gave the sandstone its name, and the Omatako Mountains. Zoologically, the Waterberg is of special importance to Namibia, because of its fairly inaccessible plateau where a number of endangered species have found a refuge. These animals were translocated into the park by the then Department of Nature Conservation to ensure the survival of rare and endangered species for the benefit of the entire country. Historically, the Waterberg is a turning-point in the story of Namibia and its people. It was here, in its foothills, where the Herero people lost their greatest battle against the German colonial forces at the beginning of the century. This defeat also meant the end of the traditional way of life of the Herero people which was to trek with their vast herds of cattle. Today, this is only practised in the Kaokoveld. A restcamp for tourists was established at the site of the former police station which was restored in 1989. Comfortable facilities include a restaurant, swimming-pool and bungalows.  [...]

This is an excerpt from Waterberg Plateau Park Namibia (Shell Guide), by Ilme Schneider.

This hiking and nature guide (Shell) introduces to the history and development, flora, fauna and geology of the Waterberg Plateau Park in Namibia.

Many Namibian authors have contributed to the book Every December. Namibian Christmas: Stories, Reflections, Poems.