Waterberg. On the History of the Mission Station Otjozondjupa, the Kambazembi Tribe and Hereroland, by Nikolai Mossolow. 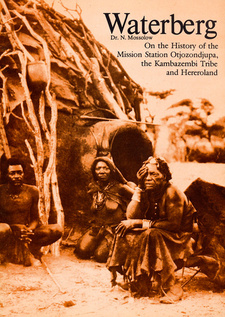 Historian Nikolai Mossolow's documentation on the history of the Waterberg Region in South West Africa includes the history of Mission Station Otjozondjupa, the Kambazembi Tribe and the then Hereroland.

Superintendent Viehe sent the Rev. Wilhelm Eich to the Waterberg even before he could submit his decision to the conference. Eich's instructions were as follows: to ensure that the place was occupied at least temporarily, that a number of Christian should settle there to ensure that there was a congregation at the station, and that an attempt should be made to persuade Kambazembi to make over the gardening land to the Christian congregation, and to confirm this in writing. Eich left Okahandja and arrived at Otjozondjupa on 13 March 1891. Kambazembi granted permission for the small Christian congregation of Okandjoze to settle at Otjozondjupa, made out a deed of gift in the name of the congregation, and emphasized in this deed of gift that he had requested the missionary to live at Otjozondjupa. (The conference, which was held in Walvis Bay from 19 to 28 April, recommended to the Deputation in Germany that the Rev. Eich reestablish the mission station at Otjozondjupa on the grounds "that a part of the Schutztruppe and the German colonization, which is to be expected soon, could also take over this place and thus remove it from the influence of the mission. The superintendent and deputy superintendent sent Br. Eich there so that he should remain there some time to prove that our mission is not willing to give up this excellent place, and also, if in any way possible, to retain it for the natives." The telegram received in August the same year laconically confirmed this decision: "Eich - Waterberg"!) Eich remained at Otjozondjupa. He was bitterly disappointed when the people from Okandjoze broke their word and did not move to Otjozondjupa straight away, as Samuel Maharero had recruited some of them for an expedition against Hendrik Witbooi. At Otjozondjupa, Eich found only a handful of people who had been sent there by Kambazembi to grow tobacco for him. He hoped that people would soon come to settle at his station, but did not expect Kambazembi. In August, Eich undertook a journey to Kambazembi, who was then living at Okavitumbika, north-east of Osire, and was well received. Kambazembi could scarcely gather 40 persons for the sermon on Sunday, but he nevertheless promised to move to Otjozondjupa with his people at a later stage. Eich returned to Otjozondjupa, where the evangelist Elia Kandirikirira had been living with the congregation from Okandjoze since the end of July and was teaching 25 children. As many as 150 persons attended the sermons on Sundays. In April 1892, Eich reported on Otjuarongo, where a group which had broken away from Kambazembi 's tribe, lived. [...]

This is an excerpt from the book: Waterberg. On the History of the Mission Station Otjozondjupa, the Kambazembi Tribe and Hereroland, by Nikolai Mossolow.