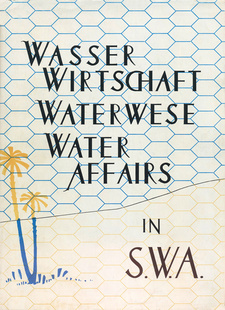 Wasserwirtschaft in S.W.A. Waterwese in S.W.A. Water affairs in S.W.A., by H. W. Stengel consists of most interesting and highly innovative solutions in aspects of water extracting and distributing in then 1963 South West Africa.

EVAPORATION AND SEDIMENTATION IN STORAGE DAMS (by Heinz Walter Stengel)

In the south, constructions for storing water followed closely upon the first settlements for Europeans in South West Africa. The oldest dam is the one built at Davignab by Hendrik Blaauw in 1888-1891 on the Bechuanaland border. According to old reports, the dam had sufficient inflow every year up to 1896, and when it was dry in 1897 the wells in the vicinity yielded enough water for farming. This connexion between dam and well, dam and borehole, has maintained its fundamental significance for water supply in South West Africa, to this day. The constructions then in use were not only for the watering of livestock but served mainly the cultivation of wheat, vines, tobacco and other produce. Animal husbandry was still in its infancy and the transportation of the most important foodstuffs was cumbersome, time consuming and expensive. It is very interesting to read of the first attempts at dam building and of the enterprise and initiative displayed by the first settlers in their struggle to wring fruits from the soil of this barren land. In his book on the economic development of German South West Africa, Prof. Th. Rehbock wrote in particular on the utilization of water: "The building of dams (1888-1894) in the southeast corner of Namaland will soon be copied in central Namaland in the district of Gibeon, where the German settlers Brand near Mariental and Seidel on the right bank of the Fish River, 20 miles above Gibeon, have built dams for agricultural water supply. We did not visit the last named place, on which work was started while we were in Gibeon (1897) because the news of the intention to build a dam there reached us too late. The dam is now completed and should be in operation during the coming rainy season. The cultivation of grain on a large scale is being planned. The necessary machinery: sowing machine, threshing machine and grinding mill have already been dispatched to German South West Africa. "Farmer Brand is also making arrangements for the large scale planting of grain. One of his ideas is the closing off of a pan about 1 sq. kilometre in area, by an embankment 30 m. long and 2.5 m. high, and excavating a 600 m. long ditch, through which the water collected from a 600 m. training bank in the larger pan is led into the Pan. This arrangement, which is similar to the one at Noagas was completed between February and March 1897 at a cost of 1200 marks." At that time, these layouts were intended for the cultivation of grain and other crops. To-day such pans would be provided with excavation dams to create a water supply for grazing stock. Farmer Brand was then busily engaged on building a large irrigation dam, but the Government postponed its completion because of inadequate funds. Very informative on matters pertaining to dam building were the travels of A.Kuhn, who on instructions from an irrigation syndicate travelled twice through the South before the native risings (1901-1903). The further development of dam building after the native risings, from 1907 on, was described by F. Hermann, among others, as follows: [...]

No Cross Marks the Spot

No Cross Marks the Spot: The story of the Makololo Mission is one of the most tragic episodes in the annals of missionary history in Southern Africa.