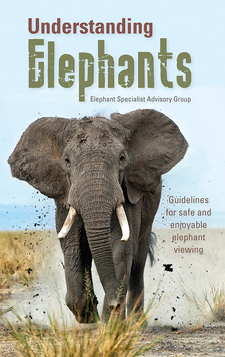 Understanding Elephants, by Marion E. Garai et al. is an essential guide for those planning visits to game reserves: aside from the interest factor, being able to read the tell-tale signs may just save lives.

It does not guarantee that you will never experience an incident in proximity to elephants, nor can it anticipate every situation or predict the behaviour of individual wild animals. Three maxims to keep in mind for a more enjoyable safari: Elephants are intelligent, have emotions and want mainly to be left in peace. Like all animals - including humans - elephants have a 'personal space', which they do not like invaded. You are in their home area. In general, elephants will give warnings before launching an attack. These signs must be understood, respected and reacted upon. As more and more tourists visit game reserves and are exposed to elephants, it is likely that the number of human-elephant encounters will increase correspondingly. On average, up to three people are killed annually in South Africa by elephants, and another three are seriously injured. The majority of these incidents could have been avoided had the people involved better understood elephant behaviour and been able to read the tell-tale signs. Remember, an attack is not just potentially tragic for the people involved: in many cases it leads to the demise of the animal too. With this book we hope to provide readers with a better understanding of elephant behaviour and of how to avoid a negative or unfortunate encounter with these majestic animals. We offer suggestions on how to behave when driving near elephants, as well as how to react in difficult or dangerous situations. At all times, elephants must be given right of way, and common sense and respect for the animals must prevail. People have always been fascinated by elephants. Over the past 30 years elephants have been translocated to many private and state-owned reserves within South Africa, in order to make them more accessible to both local and international tourists. Initially, only young elephants were captured and translocated. However, once the technology of moving entire family units and large bulls had been mastered, the practice of moving juveniles alone was terminated and cow-calf groups, as well as larger bulls, were translocated following a specific set of regulations and preconditions. As a result, with the exception of the Kruger National Park Complex (including adjacent reserves that have dropped fences), Addo Elephant Park, Mapungubwe National Park and Tembe Elephant Park, elephants in all other reserves in South Africa have been brought in from elsewhere. Translocation itself, as well as factors such as restricting fences, limited property size, human disturbance and encroachment on their habitat, have an adverse impact on the animals' mindset and social behaviour. These influences have been largely underestimated and poorly understood in the past. It is only now, after several decades of practising translocation, that consequential patterns of behaviour are being recognized. This book provides basic information on the normal behaviour, communication and interactions of elephants, and it also details the psychological and behavioural consequences brought about by social disruption. The enduring impact of early traumatic experiences, including Post-Traumatic Stress Disorder, is explained. Differences between a 'normal' population and a translocated one can be an important factor, particularly if you are driving in one of the smaller reserves in South Africa where elephants have been introduced relatively recently. Understanding these factors makes it easier to read abnormal or unpredictable behaviour. [...]

This is an excerpt from Understanding Elephants, by Marion E. Garai et al.

Understanding Elephants is a must-have companion for visitors of game reserves in Southern and East Africa.