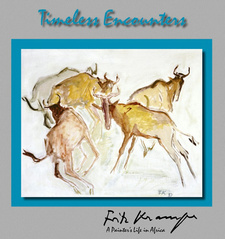 The artist Fritz Krampe, and more specifically Fritz Krampe the draughtsman and painter par excellence, does not conform to any of the recognised art styles of the 20th century. In his biography Timeless Encounters. Fritz Krampe, a painter’s life in Africa, Peter Strack introduces this extraordinary man.

Fritz Krampe, born on December 12, 1913, at an early age was fascinated by animal behaviour as some of his forceful drawings of gorillas and elephants in the Berlin Zoo testify. He studied painting up to 1939. In between he revelled in a free and adventurous life amongst animals in their wild state. The Siberian polar regions offered ample opportunity for studies of bears, seals, whales, reindeer and birds. In World War II he saw service in North Africa with the German Afrika Korps. Taken prisoner-of-war, he was sent to Australia where he tamed and trained hawks. On his return to Germany he passed Ceylon. This made him long for India, the home of the wild elephant. In 1951 he emigrated to South Africa as an ordinary house painter. Soon afterwards he came to South West Africa where he decorated farm houses with colossal friezes. In a short time he became the painter of wild animals and native life. In Johannesburg in 1965 the STAR wrote of his exhibition, "big view, big painting, big painter, big subjects." As an individual he was a wonderful companion, at home everywhere, an accomplished pianist and a game sportsman. His trip to India, at last realised, proved fatal. A rogue elephant put an untimely end to this gifted artist near Ootacamund/Nilgiri on July 28, 1966. From the beginning "modern" art was characterised by a stylistic pluralism which virtually provoked artistic individuality. Fritz Krampe was a loner in every respect. His preference for the figurative and his almost exclusively monochrome palette were determining factors for his nonconformist approach at this difficult period of his life. His "retreat" to the African continent from 1951 to 1965 is undoubtedly understandable, considering the hardships in postwar Germany in 1947. It was also a contributory factor towards his nonconformism as an artist. is retreat to Africa alienated and at the same time liberated him from the artistic debates which took place in Europe during the 1950s and 1960s. The wave of abstraction, which permeated the artistic styles of Europe at that time, passed him by like the evening breeze. It was his attitude towards his own work, liberated from all constraints, dogmas and philosophies of the avantgarde, which brought the quintessential artist in Krampe to the fore.

His unfettered approach gave birth to a body of work with a freshness of its own and a powerful, yet sensitive self-sufficiency. The fact that Krampe did not conform to popular clichés should, however, not be seen as a disadvantage when considering his work - quite the contrary. From the very beginning his artistic development was orientated primarily towards the characteristic movements of animals and the condensed portrayal of their intrinsic nature. This was to hold true for him throughout his life. Such an approach required extraordinary powers of observation and a sound knowledge of anatomy. Based on Krampe's unusual approach, a comparison with African rock painting artists comes to mind. In most cases he only observed his subject. The realisation of the observations, the artistic interpretation always took place later in the studio.

This procedure led invariably to innumerable versions of a composition. It was also of importance to Krampe to work with the most economical of means. The creative process was more important to him than the final outcome. The latter led to the frequent use of the front and back of a drawing surface. Krampe never wanted to be called an animal painter. When portraying animals, it was not only the purely physical appearance that was important to him; what also mattered to him was to lay bare the archetype of the animal. He was also an excellent portraitist as well as book illustrator. The human figure, and above all, the totally unspoilt indigenous peoples of Africa, who brought to the fore his masterful portrayals of their characteristic qualities, occupied another important place in his artistic work. The purpose of this book is to shed light on Krampe's Africa period from the beginning of 1951 to the end of 1965.

This is an excerpt from the book: Timeless Encounters. Fritz Krampe, a painter’s life in Africa, by Peter Strack.

This guide is the only of it's kind to the art and artists of Namibia.