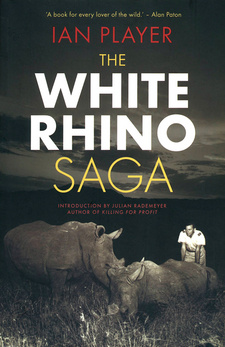 When The White Rhino Saga was originally published it was, indeed, one of those stories, due to the efforts of Dr Ian Player and his dedicated colleagues who worked from the 1950s onward to bring the white rhino back from the brink of extinction.

Through their insight and actions the world has retained an incredible natural asset in the white rhino, and Dr Player's contributions cannot be overstated. Nowhere was this fact more evident to us than during two separate occasions occurring on a trip from South Africa to Southeast Asia. The first time we came to understand the scope of what Dr Player had accomplished was when the Wildlife Protection Solutions team first had the good fortune to meet him in his home just outside Howick, South Africa. During our efforts to assess the current state of rhino conservation and secure land to start a rhino protection and breeding programme, we were eager to learn more about Dr Player's history and views on the status of rhinos today. As we made our way through Dr Player's kitchen and into his parlour, we were struck by the depth and breadth of his incredible library of literature, reflecting his passions not only for conservation, but for a great many other topics and philosophies as well. Under the watchful eye of a statue of Magqubu Ntombela (Ian's lifelong friend, mentor, and guide), he told us the White Rhino Saga in his own words. To describe such an experience is difficult at best; to describe its impact on us, less so. Not only were we incredibly moved by Ian's words and stories, but we also came to realise the broader implications of what he has accomplished. Through his efforts to save the white rhino, Dr Player has given the world a model that can be applied to many species currently under threat of extinction. By documenting the narrative behind the process, he has given us a manual vividly illustrating its execution. For both of these contributions, the world owes Dr Player an incredible debt of gratitude. Fundamental to Dr Player's approach to recovering the white rhino was the idea that the species needed more land, more breeding pairs, and sufficient dispersion to protect the overall population from threats in any one area. Implementation of a plan to address these three issues would require intensive management actions on the part of conservationists, and Dr Player and his colleagues rose to the challenge by literally inventing the methods of rhino capture and transport (which are, fundamentally, the same ones still used today) needed to accomplish their mission. The success of these efforts allowed the white rhino population to increase from the remaining 437 in one location to an estimated 20 000 animals worldwide within the span of 20 years. At that point, the white rhino was largely regarded as a key conservation success story. Sadly, the future of the rhinos is less certain today: the demand for rhino horn in the Far East is exploding as the middle class rises there and uses its newfound wealth to purchase products once only available to a fraction of the populace. It was our investigation of this international rhino trade that led us to attend the 16th Conference of Parties held by CITES (the Convention on International Trade in Endangered Species) in Thailand. During this leg of our journey, the importance of Dr Player's work stood out to us again; this time on a global stage. The South African government, currently engaged in a literal war for the future of the rhinos, was soliciting suggestions from the international community on how to cope with the black market forces driving the rhinos toward extinction. (...)

This is an excerpt from the book: The White Rhino Saga, by Ian Player.

Shaping Kruger provides fascinating insight into the lives, habits and behaviour of the larger animals that significantly affect the workings of the park.

Knowledge lives in the lake. Case studies in environmental and customary law from southern Africa

Knowledge lives in the lake: Case studies in environmental and customary law from southern Africa presents research within the framework of the international Biodiversity Monitoring Transect Analysis in Africa (BIOTA) Project.

The Man with the Black Dog. A true modern-day Jock of the Bushveld

The Man with the Black Dog is permeated by the same love and empathy that made Jock of the Bushveld such a classic.