The Springboks and the Holy Grail, by Dan Retief 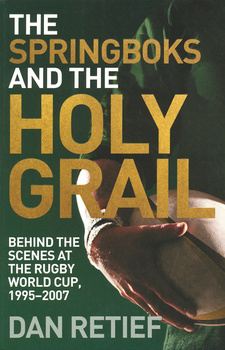 Dan Retief's book, The Springboks and the Holy Grail, provides fascinating insight into an event that is now one of the biggest in the world of sport, and contains numerous interviews with key players and administrators, as well as well-known figures who were touched by these campaigns.

Arguments concerning team selection are almost as old as the Springbok jersey itself, but some say that, at the time of the inaugural 1987 Rugby World Cup, Naas Botha was in charge of the best Springbok backline ever. The year before, the Boks had beaten the New Zealand Cavaliers, the All Blacks in all but name and official sanction, 3-1 in a hotly contested and controversial series. Many aficionados rated the backline of Garth Wright, Naas Botha, Michael du Plessis, Danie Gerber, Jaco Reinach, Carel du Plessis and Johan Heunis as the best ever. But some would say that the best line-up never actually played, for that youd have had to put in Divan Serfontein for Wright at scrumhalf and Ray Mordt for the South African 400m record-holder Reinach on the right wing, but Botha has no doubt that his team, with a formidable and massive pack consisting of Piet Kruger, Uli Schmidt, Frans 'Domkrag' Erasmus, Louis Moolman, Schalk Burger, Wahl Bartmann, Gert Smal and Jannie Breedt (how good a set of forwards is that?), would have been extremely competitive and might even have won the 1987 World Cup, had they been allowed to compete. That they didn't compete could be attributed to the apartheid policies of South Africa's then National Party government. Botha's recollection about missing out on the inaugural RWC is typical of many, but not all, of his teammates at the time. On the one hand, he was a highly trained, highly focused, highly determined sportsman denied an opportunity to compete on the highest stage, but on the other he accepts that the system he inadvertently represented was indefensible - after all, he had been in New Zealand in 1981 and had experienced how deep the world's abhorrence of racial discrimination ran. Even so, not having been part of a tournament that might have crowned an already impressive career is not something Botha dwells on. He does, though, proffer a perceptive view of the role the Springboks played in helping the All Blacks win the Webb Ellis Cup. 'We had a very good series against the Cavaliers,' he says. 'They had top players such as Grant Fox, Dave Loveridge, Murray Mexted, Buck Shelford, Jock Hobbs, Mark Shaw, Andy Haden, Gary Knight, Hika Reid and John Ashworth, and had set themselves the target of becoming the first New Zealand team to win a series in South Africa [something that was not achieved until 1996, under Sean Fitzpatrick]. 'We had a very good side, with good depth, but even though we watched the World Cup games on TV and wished we were there, there is no point pondering on what might have been - certainly I don't. The reality is that we were not there, and you can't change that, but it's ironic that we probably played an important role in the All Blacks going on to win the World Cup for the first time. 'They [the sports administrators of the New Zealand Rugby Union] quickly forgave the Cavaliers, which meant they went into the tournament with a team forged in the heat of the fire the year before in South Africa. You can't underestimate how important that was. Plus, the fact that we played four Tests on four successive Saturdays for the first time ever also helped to hone the All Blacks for the tournament.' As it turned out, Botha's potentially golden generation would not play in the next World Cup either, in England in 1991, as the steel door of isolation slammed shut. (...)

This is an excerpt from the book: The Springboks and the Holy Grail, by Dan Retief.

The Cape Malay Cookbook is a practical guide designed to enable anyone to produce authentic and delicious Cape Malay food.