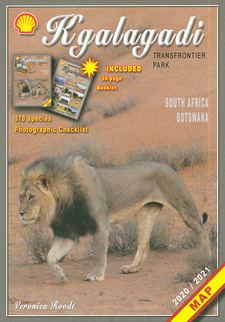 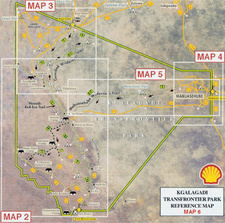 The reference map shows the areas covered by the Shell Tourist Map of Kgalagadi Transfrontier Park. 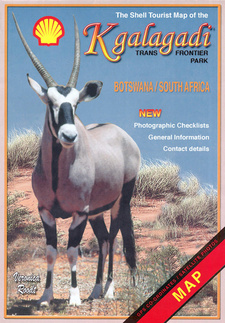 Along with her well-known and reliable map, The Shell Tourist Map of Kgalagadi Transfrontier Park, cartographer Veronica Roodt gives general and special information on the park as well.

On 7. April 1999 Botswana and South Africa signed a bilateral agreement in which they agreed to manage their adjacent national parks, Gemsbok National Park in Botswana and Kalahari Gemsbok National Park in South Africa, as a single ecological unit to be known as the Kgalagadi Transfrontier Park. The ecological unit has been In existence for more than 50 years, with no barrier to wildlife movements and relatively little human interference. This is the first formally declared Transfrontier Park in southern Africa, but luckily there are plans for more such parks in the future. There is a unified set of regulations for both sides but the management of internal affairs and the development of tourist facilities remain separate. The game-drive routes on the South-African side are mainly in the two river valleys, the Nossob Valley in the north and the Auob Valley further south. The roads are gravelled and accessible by sedan cars. There are three main fenced camps, Twee Rivieren, Mata Mata and Nossob Camp, and they all have small shops, fuel, chalet accommodation and camping. There are also four unfenced wilderness camps called Grootkolk (near Union's End), Kalahari Tented Camp (near Mata Mata), Urikaruus and Kieliekrankie (the latter two are between Mata Mata and Twee Rivieren). Additionally, they have two 4x4 camps, Bitterpan (south-west of Nossob) and Gharagab (near Union's End), both of which can only be reached by a 4x4 vehicle. The Botswana side of the Kgalagadi Transfrontier Park has been maintained in a natural condition as far as possible, and man-made development has been kept to the minimum. Most of the campsites have been established in such a way that their presence is in harmony with nature, without fences or any form of above-ground masonry. In this way visitors are able to enjoy the full wilderness experience. All the roads on the Botswana side strictly require a 4x4 vehicle. There are camps at Mabuasehube, Swartpan area, Kaa Gate, between the Nossob Valley and Mabuasehube and a few along the Nossob Valley. There are special 4x4 Trails on both sides of the border, specifically designed for only one group at a time, thus offering complete exclusivity. (...)

This is an information excerpt from: The Shell Tourist Map of Kgalagadi Transfrontier Park, by Veronica Roodt.

The Shell Tourist Map of Botswana