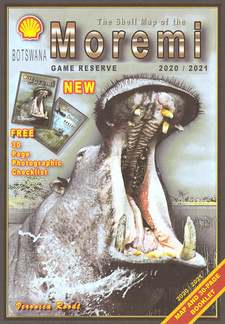 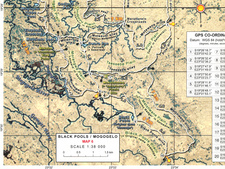 This is a detail from a secondary map of The Shell Tourist Map of Moremi Game Reserve, Black Pools, Mogogelo.

Moremi Area is the place where cartographer Veronica Roodt lived many years in a bush camp and did her mapping work. The Shell Tourist Map of Moremi Game Reserve belongs to her well-known set of Botswana region maps supported by Shell Oil Botswana.

Locality Moremi is situated in the heart of the Okavango Delta and is completely buffered by wildlife management areas. It lies roughly between E22°30' and E23°55 and' between S19°00' and S19°35 and covers an area of 4871 km². October is the hottest month with mean maximum temperatures of 35°C or more, and a mean minimum of 20°C. The coldest months are June and July with a mean minimum of 6°C and a mean maximum of 25°C. It is only very rarely that temperatures drop below zero. The peak of the rainy season is January/February but it may start in late November up to March. In winter there is no rain. The mean annual rainfall varies between 480mm and 520mm per annum. The most popular time of year is in winter (May to August) but both seasons have advantages. There is more animal activity around permanent water sources. The animals are easier to see because many of the plants loose their leaves. It dees not become very cold in winter, in fact the days are mild and pleasant. It becomes extremely hot in summer, especially from October onwards. It only really starts raining in January. From October to December is a great time for bird watching as the migrants arrive, many of which breed in the Delta. During the rains Moremi is very difficult to negotiate but it is beautiful, the plants are in bloom and the animals have their young. It is absolutely essential to have a 4x4 vehicle to enter Moremi as the roads are very sandy in places and during the rains the clayey soils become sticky and there are some water crossings - a real challenge! It is possible to fly to Maun from where you can fly directly to your destination in Moremi, join a mobile safari or rent a 4x4 vehicle. There are airstrips at Khwai, Xakanaxa and on Chief's Island. By road Travel north-east from Maun for 100 km to get to South Gate. It is also possible to approach Moremi from Kasane but it is a long distance of 313 km. Night drives and walking are not allowed inside Moremi. It is possible to do boat or mokoro trips from the boat stations in Moremi (at Mboma Island, Third Bridge and Xakanaxa). It is also possible to arrange an over-night trip on an island. The lodges in Moremi triangle all offer boat trips to their clients. Moremi was first established on 15 March 1963 and included only the dry-land triangle area between the Khwai and Mogogelo rivers. In the 1970's Chief's Island was added and in 1991 a section between the Nqoga and Jao rivers in the north west corner was added to give it its present shape. (...)

This is an information excerpt from: The Shell Tourist Map of Moremi Game Reserve, by Veronica Roodt.

The Shell Tourist Map of Botswana