The most successful African businessman in Namibia, by Abed Shiimi yaShiimi 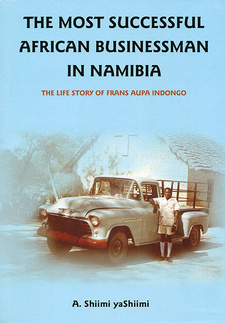 Sworn translator Abed Shiimi yaShiimi has written the life story of entrepeneur and businessman Dr. Frans Aupa Indongo who, as a simple man from Oshana in the Owambo area, has made an exceptional Namibian career since the 1960s and is admired for his collective behaviour, humbleness, excellent business knowledge and outstanding financial management in both business and farming.

[...] When Frans Aupa Indongo returned to Walvis Bay in 1958, he went to work in a factory named Ovenstone. He worked in the canning division, putting fish on the conveyor belt for canning. He worked there until 1961. The company he used to work for is today called Etosha Fishing Co. and it is one of the companies he has shares in, of between 6% and 47%. Today he is one of the owners of that company he used to work for. This means that being the co-owner of the company he used to work for while on contract, the Managing Director of the same company is currently working under Frans Aupa Indongo as his boss. A reverse discrimination of the highest level is here justified. Contract labourers' residences in those days were compounds. This is where Aupa lived with fellow contract labourers. They received the following items "free of charge": tobacco, boxes of matches, jam and soap." I did not use these items and therefore sent them to my sister Paulina to sell them for me," Aupa clarified. "When I used to sew in Walvis Bay, I developed a good idea of sending the sewed items to Oranjemund, the current Namdeb, for them to be sold there. I sent them by mail. There were so many contract labourers from Ovamboland, who needed these items badly and which were selling quite well and I received better returns than the ones I was making in Walvis Bay. Two main reasons that my products were selling well are that firstly, contract labourers who knew how to sew were not allowed to take their sewing machines to Oranjemund and secondly, there were no shops from where the contract labourers could buy the items they needed. It was for the above-mentioned reasons that I was making good money from Oranjemund." Aupa left the teaching profession and went to work on the contract labour system in the south for love of money. He was lucky not to have worked on a farm. His first type of employment in the south on a contract, was with the municipality of Walvis Bay. His responsibility was to supply the generating machine with fuel and his salary was three Namibian dollars a month. "In supplying the machine with fuel, we used the funnel and looked at the designated numbers until it was enough," Aupa clarified. After his contract of eighteen months expired, he went back to the former Ovamboland and then again in 1958, returned to Walvis Bay. "While I was still working in Walvis Bay in 1957, I had to make some bricks in my spare time, to supplement my income. I was working for Mr Martin Billy and my wage was ten cents per thousand bricks. I could make five thousand bricks a day and was paid fifty cents a day. My fellow workers were unable to make so much each day. In other words, no one could compete with me. In the same year, I was able to buy my first sewing machine and the money came from making bricks. I quickly mastered the skills of using the sewing machine. I continued sewing trousers, shirts, baby carriers and other traditional garments. The sewing machine was a manual one," Aupa related his story. [...]

This is an excerpt from the biography: The most successful African businessman in Namibia, by A. Shiimi yaShiimi.

The most successful African businessman in Namibia

The most successful African businessman in Namibia is the rare biography of Dr. Frans Aupa Indongo.

Traders and Trade in Colonial Ovamboland, 1925-1990 introduces to the history of traders and trading stores in twentieth century northern Namibia.

Understanding Policy Domains, their Salient Forces, and Organisational Challenges examines the complexity of policy making processes within the context of human action.

English Translation of the famous and rare book of Missionary Tönjes, first published in 1911

A Swedish Pioneer in Southern Africa