The Great Agony and Pure Laughter of the Gods, by Jamala Safari. 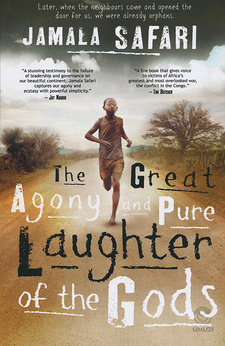 The Great Agony and Pure Laughter of the Gods tells the story of a teenage refugee who flees his home during the Congolese War and is then forced into being a child soldier. After falling sick and ending up in hospital, he is on the run again, traveling Central Africa towards Mozambique, and haunted by the ghosts of his past. It is the story similar to Jamala Safari's.

Sometimes Risto's father would say that man is the forger of his own history. In his hands lies the power to challenge and to change, in his feet, the conquering force, and in his mind, the driving compass. Therein is the essence of miracle and mystery. Good or bad, it will be the legacy left behind when he no longer has a voice to speak or strength to stand. Many times Risto wished not to walk, not to touch; to stand still or find a cave to hide in. Then no footstep would be seen and his hands would leave no mark behind. If only that cave could be found, he would be in there right now; he would get in, close his eyes, clog up his ears, and ask rat and mouse to fill up the hole with soil. Then he would leave this earth, and sleep and sleep forever ... and peace would come to his spirit and soul. Sometimes he wanted touching, walking, but was afraid to put his foot down in the flooding river, in the stormy fire, in the ghostly mouth of the world. In the end, he found himself on a fragile island: north, east, west, south, no path. All around him, children like him, raped and killed, many with hacked-oft hands and legs, the young mutilated. And the war continued. Each day, moaning came from nearby. Sometimes three or four would die in his street alone. He would hear people yelling, screaming at the announcement of death. Always the same, the story the same: They entered our house, we wanted to give them money, but they said they didn't need le francs Congolais. Finally they locked us in a room. They took Mama and our sister in one room and Papa in another one. We heard Mama and our sister yelling and yelling like birds whose feathers are being pulled out while alive. Later it was cold silence. We heard a few shots. There was no sound it the house after the door was slammed. Half an hour later, wher the neighbours came and opened the door for us, we were already orphans and without a sister. Papa was shot in his forehead. Tht neighbours didn't want us to glance at Mama and our sister. Their bodies were naked, blood spots were coming up north from their navels. Both of them dead. Children went on playing. They were told never to go far from home because anything could happen, and their family might need to flee the town. They might hear something like a thunderclap, then a heavy hail-fall on the roofs. Then a big cloud of smoke in the sky, meaning a bomb had fallen on nearby houses. People would moan, weep, but no mercy would come their way. Guns and death had become part of their daily lives. That was how they lived. This was Risto's hometown, Bukavu, where he lived, tried to dream, then refused to, as he knew there was no place his foot could walk to write his own history. Risto Mahuno, fifteen years old, with eyes older than his age. He had seen more than he deserved. One could say that soccer brought healing to Risto. This was the only time his mind forgot his wish of finding a little cave where he could sleep forever in peace. Meeting his friends every day to play football, he felt the need to live again. [...]

This is an excerpt from the book: The Great Agony and Pure Laughter of the Gods, by Jamala Safari.

The Great Agony and Pure Laughter of the Gods

The Great Agony and Pure Laughter of the Gods gives voice to victims of the conflict in the Congo.

The agony of truth. Autobiography of Samson Ndeikwila

The Agony of Truth is Samson Ndeikwila's autobiography on SWAPO's ugly hidden secrets of unexplained deaths, disappearances, unjustified imprisonment, torture and accusations during the struggle for power in Namibia.