The Communistisation of the ANC, by Gerard Ludi. 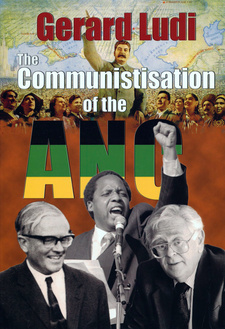 Gerard Ludi was recruited by South African Intelligence to infiltrate the Communist Party which had gone underground after it was banned in 1950. The Communistisation of the ANC is his memoires and statement.

The handover of its colonies to their Marxist proteges did not go smoothly as Lisbon had hoped. Within days rival guerrilla movements in its colonies refused to accept FRELIMO and the MPLA as the legitimate heirs to Portuguese rule in Mozambique and Angola respectively. UNITA retreated to its former stronghold in the eastern bush and continued with its guerrilla war. In Mozambique the rival RENAMO movement returned to the bush and declared war on FRELIMO. And so the Portuguese colonies of Angola and Mozambique, both on South Africa's borders, became fully fledged Marxist-Leninist dictatorships within the greater Soviet Empire. The Portuguese colonialists were replaced by droves of Russians, Cubans, and East Europeans who, in typical Soviet colonial mode, worked to strip the former colonies of the little natural resources they possessed. The borders with South Africa were closed and the South African liberation movements for the first time enjoyed the convenience of bases on South Africa's border. The Rhodesians had created RENAMO using the Portuguese-trained Flechas (arrows). I had seen the Flechas in action in Angola. These units consisted of 'turned' former revolutionaries from the north and tribal Bushman in the south. When the Reds took over they summarily executed all Flechas they could find. So quite understandably the Flechas fled en masse to Rhodesia, Botswana, the Congo and South West Africa. The Rhodesians immediately put them to use by training and deploying them across the Umtali border and in this way created the Macua tribal based RENAMO rebellion in central Mozambique. When Western strategists woke up to the realisation of the important gains the Soviets had made in Africa through the Portuguese Carnation Revolution, all stops were pulled out. The US, through the CIA and the State Department, implored South Africa to support both UNITA and RENAMO. Washington sent huge sums to support especially UNITA through secret Pretoria channels. At the same time it urged South Africa to provide logistical and military support to both UNITA and RENAMO. US aid to the FNLA through Zaire significantly increased while South African aid to it and UNITA were soon open secrets. That the Americans were footing most of the bills was known to only a few. Millard confirmed that both Presidents Johnson and Nixon and Secretary of State Kissinger had repeatedly instructed the CIA director to make both Angola and Mozambique high priority intelligence targets and to support counter-revolutionary movements in both countries. He said South Africa was chosen as the route to support UNITA and RENAMO. The CIA, as far as I was aware, steered clear of any formal liaison with Rhodesia and used only South Africa as the conduit. So it is possible that indirect US aid might have assisted the early Flecha excursions into Mozambique from Rhodesia. As mentioned before, the CIA continued to play a dual role in Africa. As a well-heeled information collection machine they recruited and secretly ran agents in almost every revolutionary liberation movement while cheerfully conducting business with the government in power. The CIA's chief mandate was to counter communist Cold War advances, but it was used to channel aid to counter communist rebel movements, either directly or though surrogates. South Africa first realised the benefits of being such a surrogate during the Nigerian I civil war. While I never played a role in this, some South African Air Force (SAAF) officers who had later joined BOSS, used to love boasting about their roles in the conflict. During this time relations between Paris and Pretoria were exceptionally good. Pretoria bought Mirages and Allouettes and learning French was the in thing in Pretoria government and high society circles. So when war broke out between the Biafrans and the rest of Nigeria, these officers claimed, Paris used Pretoria to channel clandestine aid to Port Harcourt. The SAAF, and later Safair, established an air bridge that flew military and humanitarian aid to Libreville in Gabon. [...]

This is an excerpt from the memoires: The Communistisation of the ANC, by Gerard Ludi.

The Super-Afrikaners. Inside the Afrikaner Broederbond

The Super-Afrikaners, originally published in 1978, scandalised South Africa as it exposed the secret workings of the Afrikaner Broederbond.