The Bird Guide of Southern Africa, by Ulrich Oberprieler and Burger Cillié 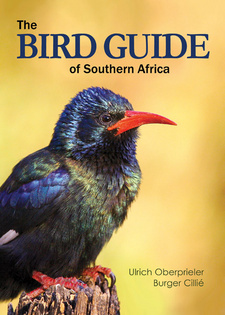 The Bird Guide of Southern Africa, by Ulrich Oberprieler and Burger Cillié.

From the book The Bird Guide of Southern Africa, by Ulrich Oberprieler and Burger Cillié, this is part of the introduction and an advice how to identify the bird shown on the left picture.

Step 1: Carefully study the bird and note as much detail as possible: habitat and distribution, size and shape of the bird (including its extremities such as the bill, legs and tail), colour (of both the plumage and the bare parts such as the bill, legs and eyes), call (if heard), behaviour (even perching quietly is behaviour) as well as the time of year when seen (summer or winter season). It is often helpful not to immediately try searching for the bird in this Bird Guide, but rather to spend some time on a basic line drawing indicating important features.

Step 2: Find the correct main group the bird belongs to by following the key on page 16 step by step, eliminating groups as you go along. Start with Group 1 and ask yourself the question: "Does this bird fit the description of a flying waterbird". After reading the short description op page 16 as well as having a brief look at the various birds included in Group 1, the obvious answer is: "No, this bird is not a flying waterbird". Repeat the process with Group 2.

Again the answer will be: "No, it is not a swimming waterbird". Carry on with Groups 3, 4, 5, etc. On reaching group 8, you will realise that: "Yes, this bird has a long straight bill and fits the description given on page 20". After having worked through the key a number of times, you will soon be familiar with the various main groups. This will eliminate the need to always start with Group 1 and to progress systematically. You will, for example, soon realise that all weavers are part of Group 12: the seed-eaters, and use the colour coding to immediately open the book on page 368.

Step 3: Identify the bird species by first scanning the subgroups described in the text as well as the photographs on the facing pages. Group 8 is a rather small group that contains only three subgroups, namely the wrynecks, woodpeckers and kingfisher. Our bird is obviously a kingfisher. After comparing the bird to the photographs of the various kingfishers, you will identify our example as the Greyheaded Kingfisher on page 192. It is, however, important not to rely on visual identification alone, but also to read the text on this species. This is especially true of birds with dull colours, lacking any bright identification features. Birds such as the brown eagles and the so-called LBJ's (Little Brown Jobs), such as the larks, pipits and many warblers, are often near-impossible to identify by looking at the photographs only.

Examples from: The Bird Guide of Southern Africa, by Ulrich Oberprieler and Burger Cillié

Group 2: Swimming and diving waterbirds: Grebes
These small waterbirds dive regularly in search of food and may remain submerged for nearly a minute. They appear tailless and have relatively short, rounded wings. The toes are lobed for swimming. During the breeding season they have a more colourful breeding plumage. The chicks are striped and are usually carried on their parents' backs. Grebes rarely leave their water habitat, but may fly at night from one water body to another. (Dobbertjies)Little Grebe (Dabchick)
About dove-sized; much smaller than any duck. The breeding plumage is characterised by the chestnut sides of the neck and the pale spot on the base of the bill. Non-breeding birds are much duller and are distinguished from the Black-necked Grebe by the dark eyes, the buff (not white) underparts and dark cheeks and throat. Single birds or loose flocks occur on most inland waters. Remains wary. Regularly dives in search of food and runs across the water with flapping wings to chase intruders. The call is a shrill, drawn-out trill. A common resident. (Tachybaptus ruficollis; Kleindobbertjie).Black-necked Grebe
Somewhat larger than the Little Grebe, but smaller than any duck. The dark upperparts and red eyes are always diagnostic. The white underparts may be seen when it floats on its side to preen. During the breeding season the head and neck are black with golden ear plumes and the flanks are golden-brown, but the underparts remain white. The non-breeding plumage is much duller, but the off-white underparts, white throat and red eyes distinguish it from the Little Grebe. Sometimes occurs on its own, but usually in small flocks on the open water of mainly dams and saltpans. Large flocks gather in bays and lagoons on the west coast. The call is a rapid chatter, a 'poo-eeep' sound and a soft trill while displaying. A common but very nomadic resident. (Podiceps nigricollis; Swartnekdobbertjie).Great Crested Grebe
Crow-sized; much larger than the other two grebes. The shape of the head with 1 its large bill and the conspicuous crest and ruff are diagnostic. The ruff is rufous in breeding plumage and mostly white when not breeding. Usually occurs in pairs on large inland waters but may gather in large flocks; rarely at sea. | Swims relatively low in the water with the head and neck held very erect. The 6 J white underparts are only visible when turning on its side while preening. It is _—_i usua||y silent, but may utter an explosive 'ra-ra-ra'. An uncommon resident. (Podiceps cristatus; Kuifkopdobbertjie)

This is an extract from the book: The Bird Guide of Southern Africa, by Ulrich Oberprieler and Burger Cillié.

The Bird Guide of Southern Africa

The Bird Guide of Southern Africa features all southern African birds, except pelagics and vagrants in over 1200 excellent colour photographs.

The Mammal Guide of Southern Africa

The Raptor Guide of Southern Africa

The Raptor Guide of Southern Africa describes both diurnal and nocturnal species.

This pocket bird guide is an essential and practical aid for birders in the bush of Southern Africa.

Field Guide to the Animals of the Greater Kruger Park

The Field Guide to the Animals of the Greater Kruger Park introduces the richness of animal life to the visitors of the famous National Park.