The Battle of Savate: 32 Battalion's greatest operations, by Piet Nortje 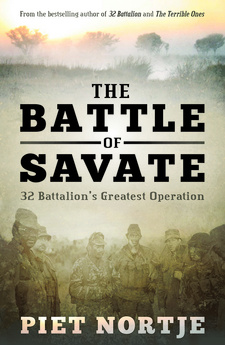 After a long and costly struggle, author of 'The Battle of Savate: 32 Battalion's greatest operations', Piet Nortje, finally managed to obtain the declassification of top-secret Operation Tiro-Tiro documents stored in the military archives. Permission to declassify these documents had been previously refused.

[...] Then, in 2012, men from the 32 Battalion Veterans' Association visited the Savate battlefield as part of the 32nd commemoration of the battle. Unbeknown to the chairman of the association, he would meet the man who had been the FAPLA brigade's acting commander on the day of the attack. Before this unsolicited meeting, I had been trying, through every possible channel, to determine the identity of, and make contact with, the FAPLA commander on that day. But either the Angolan military did not know who he was or, more likely, they were reluctant to give me the information. And so it was from the chairman of the veterans' association that I learnt the identity of the commander and acting commander at Savate: respectively, the then governor of the Cuando Cubango Province and the then administrator of Cuangar, a town and municipality in Cuando Cubango and with jurisdiction over Savate. Both were retired FAPLA generals and now politicians. I also learnt that a few Savate battle veterans lived in Cuangar. After the 2012 Angolan elections, both the governor and the administrator were replaced and it took me a while to trace their whereabouts. I used friends and acquaintances - mostly former SADF and 32 Battalion members now working in Angola - to try to make contact with the men, but this prompted late-night visits to their houses by the Angolan security and intelligence agency. I therefore advised them to drop the issue, as I did not want to see anyone get arrested on my account. In the meantime, I managed to make email contact, first via a middleman but then personally, with the administrator who had left Cuangar and was now administrator of Rivungo, a small town on the Angola-Zambia border. What started off as a healthy exchange of useful information deteriorated into his denial of documented facts, claiming they were false propaganda of the South African apartheid regime (maybe because I had questioned some of his original remarks). He told a different version of events, which painted FAPLA in a good light but contradicted what happened on the ground. After a while he became vague and eventually disappeared into thin air. I then learnt that he had been transferred to Jamba, the old UNITA hometown, after a riot against his style of governing broke out in Rivungo. Interestingly, at around this time, many aspects regarding the Battle of Savate, which for more than three decades had gone unquestioned, were now being queried in publications and on other platforms. When the first books were written about the battle, no documentary proof or evidence was available and the authors had to rely on individuals to obtain information. Ironically, it was some of these individuals who were now questioning their own recollections. And others who had originally accepted their accounts were also now expressing doubt. It was time for me to use my new insights to tell the full story. While it is unfair to analyse Operation Tiro-Tiro because the SADF commander on the day has passed away and cannot defend the decisions he made, I can nevertheless explain how the operation was planned and executed, what went wrong and what went right, and the results of the attack. I can outline the SADF strategy of the early 1980s and delve into why 32 Battalion attacked Savate on behalf of UNITA in the first place. I can attempt to explain why the events and figures that are now being questioned are in fact correct. [...]

This is an excerpt from the military history book The Battle of Savate: 32 Battalion's greatest operations, by Piet Nortje.

The Battle of Savate (Operation Tiro-Tiro) was 32 Battalion’s greatest victory since its formation in March 1976.

The Terrible Ones. A complete history of the 32 Battalion

The Terrible Ones, a comprehensive two-volume history work covers in detail the 32 Battalion's 117 documented military operations from 1976 to 1993.