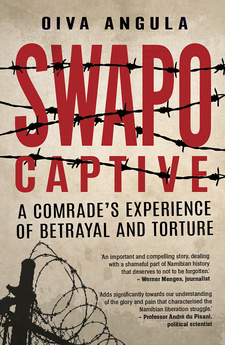 Lubango. The mere mention of the name makes Oiva Angula, contemporary witness and author of SWAPO Captive, wince. His experiences in Lubango still stalk his daily life. The pain in his body is remembered pain. The terror is terror relived.

'Dad, tell me how it was in the Lubango pits.' My son asked me this in 2000. He was sixteen years old; when I was dragged to the pits he was still two months from birth. I wondered why he was suddenly interested in my incarceration and torture in Angola during the war for independence in Namibia. I threw him some words and reminiscences and then fell silent. I did not want to share my lingering pain with him. I recalled being taken to a torture chamber without saying goodbye to his mother-to-be, who was seven months pregnant at the time. I was stripped naked, taunted, insulted and tortured by SWAPO security agents who delighted in my anguish. My hands were tied with ropes and I was lashed with sticks and a heavy plastic whip. They finally threw me into a deep pit to die. As I was to discover, a pit is a place to put people when you want to forget about them. Russian novelist Fyodor Dostoevsky sums it up for me in his semi-autobiographical novel about convicts in a Siberian prison camp, The House of the Dead: I consider those four years as a time during which I was buried alive and shut up in a coffin. Just how horrible that time was I have not the strength to tell you... it was an indescribable, unending agony, because each hour, each minute weighed upon my soul like a stone. Lubango. The mere mention of the name makes me wince. A small town in southern Angola, Lubango became the site of human suffering that almost defies description. Here, we were thrown into pits, where day succeeded night and night succeeded day in an endless cycle of hope and dejection, life and death. The truth of what happened in exile during Namibia's struggle for freedom is difficult to fathom. It is a brutal episode in recent Namibian history that barely registers in the present-day national consciousness. When I tell people what I went through in exile, their eyes roll in disbelief. Many Namibian freedom fighters were summarily executed; others were made to disappear. Still others experienced gross physical abuse, torture and prolonged deprivation. Such were the systematic human rights abuses in exile. This is what SWAPO security agents did to many of the movement s cadres, fighters, trade unionists, and community and youth organisers, including non-party members, peasants and church workers. It was done without remorse or pity, in the name of revolutionary duty. When my son asked me to tell him about the Lubango pits, I decided to write a personal narrative for posterity. Memories came flooding back during the writing process. As I wandered in the field of memory, I remembered sad and happy events; my life has spanned more than five decades now and I had not thought of many of those events until I started putting pen to paper. SWAPO Captive comprises some of my memories, compiled with care, documenting my experiences. It is a story that describes my childhood, my maturing into boyhood and my years as a member of PLAN, SWAPO s guerrilla army. It has been a roller coaster of a life. My story is one of fate. Overnight, my status as freedom fighter changed to that of 'enemy agent'. The evidence? Extracted from the blood-spattered confines of torture chambers. I was a victim of the witch-hunts that violently tore apart SWAPO's ranks in exile during the 1980s. I was dragged to the omalambo, as the pits are called in the local Oshiwambo language, on 22 October 1984, where I was held captive with hundreds of other compatriots. [...]

This is an excerpt from SWAPO Captive, by Oiva Angula.

SWAPO Captive is a tell-all expose on life as a SWAPO captive in the infamous death dungeons where SWAPO turned on its own and unleashed untold suffering.