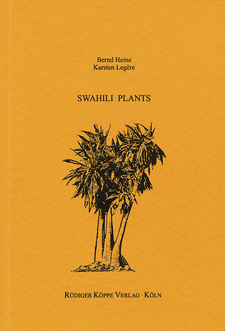 The ethnobotanic study Swahili Plants has a number of limitations. First, the authors Bernd Heine and Karsten Legere are Africanists having no training in western botany, which means that they had to rely on the services of botanists specialized in the flora of East Africa for plant identification.

Second, rather than studying the Swahili-speaking area as a whole, it was decided that field research should be restricted to an area where Swahili is used primarily as a mother tongue and where the variety of Swahili spoken comes close to what is commonly considered to be Standard Swahili (Kiswahili sanifu). But even in this limited area we were not able to document all plants that are terminologically distinguished. Plant terminology differs from one village to another and from one region to another. Out of the over 1000 distinct plant names that we were able to collect in the course of our field work, only 166 were found to be shared by the people in Zanzibar and the opposite mainland of Tanzania. Third, while for many people, traditional Swahili-speaking communities along the East African coast are associated with an urban culture, our research was confined exclusively to the rural areas, the main reason being that town dwellers are likely to have a much more limited knowledge of the plant world than people living in the countryside. And finally, our main interest was with wild plants, especially since information on cultigens is more readily accessible through a variety of scientific and other publications. That we, nevertheless, did not exclude cultivated plants entirely had a couple of reasons. The division into wild plants (mimea inayoota yenyewe) and cultivated plants (mime» inayopandwa) is one that is not of primary significance in Swahili folk botanic taxonomy. Furthermore, the boundary between the two groupings of plants is fuzzy, to say the least. As we will see below, quite a number of plants are cultivated by some people but not by others, or in some areas but not in others, or by some people at certain times but not at other times. Finally, neither of the authors is a native speaker of English and there were no means of having the data presented in this study checked by someone having an appropriate command of the English language. It is, nevertheless, hoped that the text presented is on the whole intelligible. The lexicon presented in Part 4 resembles in a number of ways that of Greenway (1937). Like the latter, it is based on information obtained at the Tanzania mainland, in Zanzibar and in Pemba. Second, our main alphabetical listing of plant names is also according to Swahili names. But there are also differences. The main one concerns the perspective adopted. While Greenway approached the study of plants in the tradition of western botany, our main goal is a folk botanic one: We aimed at recording the knowledge and the experience the Swahili-speaking people have acquired in dealing with the plant world. Second, Greenway collected his information in various parts of Tanzania between Lake Malawi in the south and the Kenyan border in the north, while our survey was confined to the area where Swahili is spoken as a mother tongue, viz. the Tanzanian coast. In the course of field research, interviews were carried out in a number of areas, but more intensive studies were conducted in the following locations: [....]

This is an excerpt from the ethnobotanical wordbook: Swahili plants, by Bernd Heine and Karsten Legere.

Swahili plants: An ethnobotanical survey aims at studying some aspects of the behaviour the Swahili-speaking people have vis-a-vis their plant world.