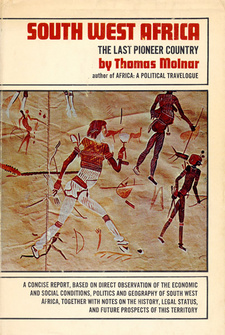 In his travelogue South West Africa - The last pioneer country, Thomas Molnar received, and conveys, very vivid impressions. Anyone visiting Africa for the first time must be struck by the indolence, incompetence and petty dishonesty which surround him, but it is unfashionable to report such things.

All of us have seen maps of a continent projected on the movie screen, then the camera zeroing in on a narrow point; suddenly the map opens up and there appears the land with its vegetation, animals, buildings, roads, and people. The abstract outlines have turned into real life. A superficial floating curiosity has focused on a concrete situation and become involved in the intricacies of a thousand events. Travel has always given me a similar sensation: Arriving at a never-yet-seen spot naturally I cannot help bringing with me recent experiences. But they become instantly obsolete, so strong are the fresh impressions, the new circumstances eager to involve me and intent on crowding out the past. When I first landed on the territory of South West Africa, I was almost a seasoned traveler on that continent; I had seen more than half of its old and new countries, I had crossed it in several directions. I had even published a book about it, a book I called Africa: A Political Travelogue. Yet South West Africa represented something entirely new and fresh; the stories and tales I had heard of this land suggested that it was even more strange and desolate than most of the African land mass; that it was primitive even by African standards; that it was almost empty since only some half a million people inhabit its wastelands, big as France and Spain combined. But the names of its places sang like strange exotic musical phrases, not yet familiar to world press and radio; Katima Molilo on a bend of the Zambesi River; the Skeleton Coast with the shipwrecks of centuries washed ashore; Swakopmund, a German settlement of pre-World War times; the Namib Desert, a strip of sand-dunes running parallel to the ocean for a thousand miles; Oranjemund, where every day half a million dollars worth of diamonds are picked up from the sand among the pebbles.

South West Africa is put down in geography books as a mostly desert-like territory between the Republic of South Africa and Portuguese Angola, with the Kalahari Desert locking it in from the east, and the Atlantic Ocean from the west. It is almost of rectangular shape, but at the northeastern corner it extends a finger, the Caprivi Zipfel, into the heart of south central Africa, establishing a link with Katanga, Zambia, and Rhodesia. And here is where the traveler's surprise begins. According to the bird's-eye view, South West Africa is one of the continent's poorest parts. One expects to see only sand and rocks, a small and miserable population eking out a hard existence, life concentrated in a few small coastal fishing towns. The mere data of demography are not promising either; only some five hundred thousand blacks and eighty thousand whites live here. One almost expects to meet more ghosts among the wrecks of Skeleton Coast and the ruins of old German forts than live men and women.

Yet, once there, both present and past capture the imagination and fasten to the soul as only in few countries. First of all let us look at the past, remote as well as recent. This far corner of the earth has an amazingly agitated history, full of epic adventures of discovery, and bloody tribal wars of extermination. Its recorded history began with the Portuguese, whose landing is commemorated by the Cross of Bartholomeu Dias, near Luderitz, on a rocky promontory furiously assailed by the waves. As Englishmen, South Africans, Swedes, Germans, and Finns tried their fortunes, they left varied mementos: whaling stations, missions, fortresses- and also learned books as their signatures in this near no-man's-land early chronicle. The chronicle is rich in passion, bloodshed, enslavement, wily tricks, cattle raids, and rebellions. South West Africa's nineteenth century, about which excellent books have been written, is as full of conflict and war as the same period in European or South American history. Black men are no more peaceful and no less intent on conquest, pillage, and genocide than the white men, or men of any other color and race.

From a distance, we are tempted to think of South West African tribes as forming one black nation, a scene, perhaps, of internal rivalries, but in basic agreement on their overall interests. This view reflects the western white man's concepts: Just as he is hard put to distinguish the faces of black men from one another, similarly, in his intellectual laziness, he prefers to label Ovambo, Herero, Bergdamara, Nama, Rehoboth Baster, perhaps even Bushmen, as the "South West African nation." Yet the recent history and present attitudes of these tribes show as much disparity and opposition as that of nations everywhere. Only animal species can be expected to behave alike and graze indifferently side by side when hunger does not torment them; large human groups are distinguished by specific traditions, social structure, past memories, future interests. Differences, even antagonisms are the rule, not the exception among them.

The tribes of South West Africa can be just as hostile to each other as French and German, British and Irish, or elsewhere in Africa, those within Nigeria and the Congo. In the last two cases, the decolonizing white man made the, to him, comfortable, but otherwise tragic, error of leaving the heterogeneous groups in one national framework, within the same borders. The accent was on rapid departure; little resistance was offered in London, Paris, or Brussels to the loudest pressure group which promised to forge a nation out of very diverse elements, but which in reality planned to set up its own dictatorial rule. Such were my reflections when I set foot on the soil of South West Africa one day in 1966. These reflections were called forth by newspaper reports at that time about horrible events in Nigeria. I did not doubt that there was a parallel between those events and the past (and potential future) of the territory where I landed, whose history was known to me, although only through reading. [...]

This is an excerpt from the book: South West Africa. The last pioneer country, by Thomas Molnar.

In his book, South West Africa - The last pioneer country, Molnar is not afraid to tackle many matters that are neither strictly political nor straight travelogue.