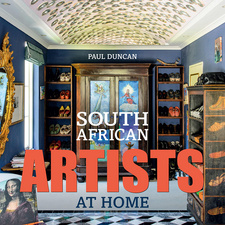 Filled with vivid photographs, Paul Duncan's and Alain Proust's book South African Artists at Home is a browser’s delight, but also a fascinating glimpse into the lives of creative, at times eccentric, South Africab individuals who rejoice in their own view of the world.

[...] I'd love to see how these people live,' Joao Ferreira told me, suggesting a whole raft of other artists for inclusion. A gallerist and dealer who's had relationships over many years with a variety of artists, Ferreira believes that artists generally, although not always, value their privacy and prefer to stay out of the limelight when they're not exhibiting or doing media interviews. There are exceptions, of course, Willem Boshoff and Beezy Bailey among them. Beezy's home is always open and he enjoys the conversation around his art and his home life, integrating sociability, family life and the making of art into the same inclusive process. In its day-today arrangements, his lifestyle brings to mind Picasso who, when living in the south of France, was very accessible. Willem Boshoff offers a highly visible entree into his life as mentor, guru and accessible Big Druid in a manner that seamlessly brings together art personae and the artist as ironic seer and social prophet. Not only does he let others into his workshop, he leads walks around urban streets in search of the overlooked genius loci. Some artists on my list questioned whether being in the book would be a good idea. As a few put it, 'this is not the sort of thing that artists do'. That may be true, and yet there's an innocent voyeur in all of us, a simple curiosity about others' lives, what they hang on their walls, or have for supper. Think of how we crane our necks to scan the bookshelves behind a writer being interviewed on TV. As Baylon Sandri of SMAC says, it's just a glimpse, and I wish more people had that opportunity occasionally. For some artists, the boundaries are less strict, for others the desire for privacy is absolute. Assembling my cast list wasn't a walk in the park. Artists who responded with generosity and even enthusiasm to welcome the presence of the photographer into their homes often felt that the connection between the personal and the making of art would in some way be made visible. The glimpse may be a subtle or oblique pointer to sources of inspiration or work habits in the making of art. In the case of Sam Nhlengethwa, a vast and informed jazz collection housed at home gives us the entree into his art. Hence we're able to look into the homes not only of Nhlengethwa, Boshoff and Bailey, but also Roger Ballen, Hylton Nel, Beezy, Johann Louw, Michael Taylor, Willie Bester, Barend de Wet, Kate Gottgens, Jody Paulsen, Tom Cullberg, Conrad Botes, and husband and wife team Brett Murray and Sanell Aggenbach. All of them opened their doors generously, put the kettle on and invited me to sit at the kitchen table and chat, sometimes venturing into territory where one rarely goes, given that this book is, in the end, about some of the best-known people - with some very bankable names - in the business. Hylton Nel revealed the provenance of objects between mouthfuls of chocolate cake and rosy strawberries as plump as a putto's buttocks served off one of his plates. Beezy and I sipped Fernet Branca before heading off in Elton John's Bentley for fresh prawns at a Portuguese workmen's caff in Maitland. [...]

This is an excerpt from South African Artists at Home, by Paul Duncan and Alain Proust.