Soccer in Africa. A Game of Passion, by Jesper Strudsholm and Tine Harden 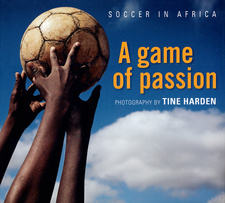 Soccer in Africa. A Game of Passion, by Jesper Strudsholm and Tine Harden.

The vibrant images in Soccer in Africa - A Game of Passion provide compelling proof that soccer is truly Africa’s game. Authors are Jesper Strudsholm and Tine Harden from Danmark.

A kick out of Africa

My friend Nathie made it sound like a matter of life and death when he phoned from the tiny kingdom of Swaziland and asked me to organise a set of soccer jerseys. This was going to cost a lot of money, but a call to another friend, the chairman of a soccer club in Copenhagen, turned up a set of jerseys made obsolete when the sponsor behind the logo pulled out. Some weeks later, Nathie assured me that the Mbangweni Pirates, in their second-hand blue-and-white jerseys - bearing the logo of a small business in Copenhagen - were now the most fashionable team in the Swazi fifth division. I asked him to send me a team photo to pass on to the Danish club as thanks for their contribution. There was no reply, but when I finally made it to Swaziland myself, I quickly forgave Nathie's tardiness. His modesty had prevented him from disclosing that he and his friend Celucolo's own time-consuming efforts more than matched the generosity of the Danes. The two young men - an IT consultant and a teacher - are among the few from their village, located in the mountains of Swaziland, who are blessed with an education. Spending an amount close to half a month's salary, they had personally added socks and shorts to the jerseys. They were also paying to hire the van that ferried the Mbangweni Pirates to other corners of the kingdom on match days. All over Africa, similar stories are repeated on the sidelines of every soccer pitch. The beautiful game is a main priority and the most addictive drug on a continent where the harsh realities of daily life create a need for diversion over the weekend, during lunch breaks and at any other time when there is a minute and a few square metres to kick a ball around. Soccer is a substitute for food in times of suffering; the saviour and destroyer of national pride; an adhesive that heals cracked societies; a vehicle for dreams; a game so simple and so diverse that it is played everywhere from dusty alleys in the shadows of the Pyramids to the world-class stadiums built for the 2010 FIFA World Cup™ in South Africa. In the mountains of Swaziland, Nathie and Celucolo saw soccer as a way of saving the young men who came trickling down from the hills around us. The players desperately needed an alternative to crime and to hanging out with the local girls in the bushes. 'We encourage them to play soccer so they don't engage in antisocial behaviour. Nowadays we have a disease called Aids', as Celucolo explained.

Almost four out of every ten sexually active Swazis are HIV-positive, an enormous threat to the future of a population of just over one million people. Nathie was acutely aware that even the hardest training and the coldest baths in the river afterwards would not be enough to save the young men, but it was the beginning of something. A nongovernmental organisation had been invited to talk about condoms and the advantages of abstinence at one of the parties in the village where the Mbangweni Pirates raised funds. The two Swazi friends are far from the only ones to realise that the actual kicking of the ball represents only a small part of the meaning of soccer in Africa. In Nigeria, the composer and writer Samuel Akpabot once remarked that soccer can 'cause young men to faint, holy men to swear and strong men to become impotent for a day'. In South Africa, the young Nelson Mandela shared Nathie's and Celucolo's belief in sport as a builder of character and nations. [...]

This is an excerpt from the book: Soccer in Africa. A Game of Passion, by Jesper Strudsholm and Tine Harden.

South Africa – The Insider's Guide is an all-in-one travel guide and adventure primer of the very best South Africa has to offer.

This ethnobotanical plant guide introduces to the various uses of more than 140 indigenous plants of Southern Africa.