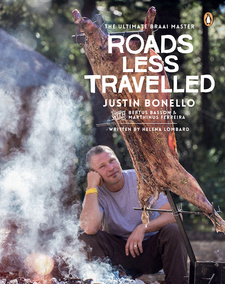 In Roads Less Travelled: Ultimate Braai Master Justin Bonello is talking about the braai and it happens all across South Africa.

Not only is the braai part of the genetic blueprint of our country, but for some of us it has become a national obsession, and for Justin Bonello, chefs Marthinus Ferreira and Bertus Basson and 50 crew and friends, South Africa’s favourite pastime was the perfect excuse they needed to hit the backroads on a bumpy 8000-km, 62-day open fire adventure. 'Thank you to my loyal Cooked family and colleagues for an epic adventure and thanks to my readers for buying Roads Less Travelled: Ultimate Braai Master (Second Season). Now get out there and create your own memories around the fire!', says Justin Bonello.

SPRINGBOK IS NOTORIOUSLY DIFFICULT TO COOK IN AN OVEN, LET ALONE ON A FIRE. THIS IS TRUE FOR MOST TYPES OF GAME MEAT, BECAUSE OF THE LOW FAT CONTENT. HERE'S A FAIL-PROOF WAY TO BRAAI A SPRINGBOK FILLET PERFECTLY, EVERY TIME.

THE SPRINGBOK FILLET:
Crush the garlic, strip the thyme leaves off the sprigs and mix well with all the spices. Put the fillet in a big bowl and rub the spices thoroughly into the meat - pretend you're massaging a pretty girl with loads of knots in her shoulders ... in other words: really get in there. Make sure the fillet is completely covered in spices and let it rest for at least an hour ... longer if you can. The general rule of thumb is that the bigger the piece of meat, the longer it'll need to rest in the rub, and the more rub you'll need. As soon as the coals are ready (moderate to hot) braai the fillet for about four to five minutes a side. Any more than this and it will lose all those lekker natural flavours. Let the meat rest for about five minutes before slicing.

This is one of the easiest veg side dishes you can do on a braai, and it's packed with flavour. Make sure you don't overcook the vegetables - they still have to go 'crunch' when you bite into them. First off, break the back ends off the asparagus (where it would naturally break if you had to bend it) and only use the spears. Put the asparagus into rapidly boiling salted water for a minute, then take it out and plonk it into iced water (fancy word for this is blanching). Do the same with the broccoli, but boil for three minutes before putting it into the iced water. Next, make the dressing, mixing together the olive oil, garlic, chilli and salt and pepper. Toss the vegetables in the dressing, then arrange the broccoli and asparagus inside a sandwich grid. Place over a hot fire and braai until charred - about two to three minutes a side. Put the vegetables back into the dressing bowl and toss one more time.

Cooked in Africa takes you on a relaxing and layed back cooking journey through southern Africa.

Based on the second season of the South African television series, The Ultimate Braai Master is a great book on outdoor lifestyle and braaing.

Cooked in the Karoo

Cooked in the Karoo will make you want to pack up your car and travel into this painted South African landscape.