Riding the Dragon's Spine, by David Bristow and Steve Thomas 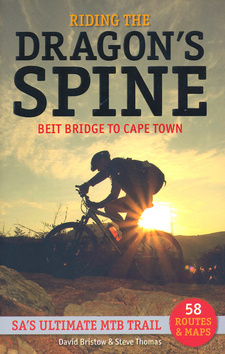 The authors of Riding the Dragon's Spine, David Bristow and Steve Thomas, since the international mountain biking grading system of green, red and black routes hardly applies to bicycle or mountain bike touring routes, developed their own and call it the Bristow-Thomas system.

This is baobab country - hot, low-lying bushveld where massive old trees dot the rocky hills and sandy washes along the great, green, greasy Limpopo River. The first half of the stage is more strenuous than you might imagine, with some stiff hill climbs, while the second half is a long, flat haul. For a first day out on the trail, it's a good tester of things to come.

Snapshot of the experience

Daytripper Steve swung a leg over his Morewood Zula and I, Eardstapper, followed suit on my Specialised 29" Rockhopper. Our backup man, amaDriver Philippe, was captaining the amazing Amarok. We headed east into the wind. Riding into the wind would become the score lor almost the entire trip. The decrepit military road, outside the Beit Bridge army base, was built by the old-regime defence force to prevent 'terrs' from crossing the Limpopo into South Africa. Nowadays the SANDF infantry (men, and women nogal, in camo gear) patrol the razor wire tor cigarette smugglers from Zimbabwe. Judging bv the multitude of holes in the fences, and the din of the shredding machine nearby, we are not winning this battle any more than did the previous regime. The Limpopo was in spate, averaging around 200 m or more across, with the country alongside green as tyre slime and the grey-green river all set about by luminous-trunked fever trees. We stopped and talked to soldiers, walkers and tomato farmers, both black and white, all seemingly happily busv and prosperous. Apparently the tomato business is flourishing there under the giant baobabs in the far north.

The hardest part, as is so often the case with trails, is locating the starting point. Travelling north on the Nl, just before the Beit Bridge border post, turn left at the stop street, immediately right at a T-junction, then right again to find your way under the twin road-rail bridges. This is the old military road that travels east along the Limpopo River all the wav to the Kruger National Park. It is tarred, kind of. Given that virtually no vehicles use it, it's a very off-road riding experience ... no easy ride, up-down all day, and several hills requiring the old zigzag climbing technique to breach. Follow thew34567e military road, over dongas, gates and game fences, no matter what. There are several places, where the road breasts ridges, in which legs and lungs are tested to the extreme, if for only short distances. The road crosses a few intermittent watercourses, such as the Sand at around 12km and the Nzhelele about 20km further. After unexpectedly rugged landscape, the road flattens out and first small, then larger farms appear. Here you start to clamber over fences and lift your bike over gates, some double height. In places it might require some scrambling around to make sure that you're on the right track. The military road has right of way. However, where you do cross farmlands (tomatoes, mainly), be engaging and polite because you arc kind of intruding. After another 20km you start to cross small subsistence farms; from about 35 to 40km they become more commercial. At the 69km mark, at a high gate, hop over the fence on your right and get onto the district gravel road - very corrugated and lined with thorn trees. (...)

This is an excerpt from the book: Riding the Dragon's Spine, by David Bristow and Steve Thomas.