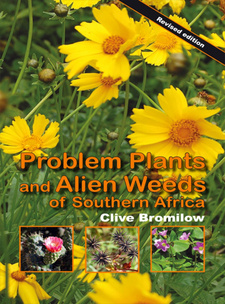 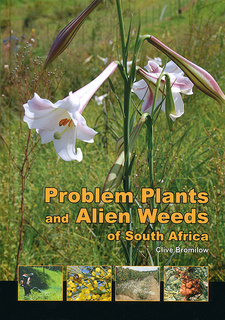 In his book Clive Bromilow points out how difficult to control problem plants and alien weeds in South Africa are.

What is a weed? A weed is a plant in the wrong place at the wrong time. Any plant can be a weed: pretty ones, ugly ones, rare ones, even crop plants such as maize or wheat. A weed must be a nuisance, just sometimes. Plants that become weeds are usually vigorous growers that compete for water, light, space and nutrients. They are adaptable, being able to easily invade a wide range of ecological niches. Most of them are of exotic or foreign origin. They are tough and can withstand unfavourable conditions. They are easily spread, producing an abundance of fertile seeds or other propagules, often with efficient methods of dispersal. They are aggressive competitors, being able to eliminate other species. The most frustrating characteristic is that, for a number of reasons, they are often difficult to control. Any plant with one or more of these characteristics may easily become a nuisance. These plants compete with crops for precious water and nutrients. They also clog machines, poison people and animals, act as hosts for crop diseases and insect pests, upset the natural indigenous ecology, destroy biodiversity, interfere with people's activities and spoil the natural beauty of the environment. Which plants are in this book? The plants in this book are as many as possible of those that occur as 'weeds' in South Africa. Many relatively common weeds may not be included and there will be others where inclusion may not seem to be justified. The general criteria used to judge whether a species warrants inclusion are the following:

A herbicide registration. This usually indicates that a plant represents a sufficient market to justify the investment required to obtain the registration. It appears, however, that sometimes a plant can appear on a label because it just happened to have occurred in a herbicide trial, was formally identified and then added to the label simply because it was there. Although it cannot be claimed that these plants are never a problem, they are not covered in detail in this book, but nevertheless deserve a mention (see page 38). Indigenous poisonous plants are also not the principal subject of this book.

Exotic origin. Not all alien plants are invasive, since many introduced species cannot reproduce or spread rapidly without continued human help, for example, many crap plants and ornamentals. Some alien plants can indeed reproduce and survive in the wild and these plants would be called 'naturalised' but only some of these naturalised plants are capable of replacing indigenous species and transforming the environment. The exact dividing line is not clear, so some relatively obscure naturalised plants may be included and some that are starting to be invasive could have been omitted.

Alien weeds and invasive species that have been or are classified as alien weeds or invasive plants by the current CARA or proposed CARA or NEMBA regulations.

The plants in Problem plants and alien weeds of South Africa therefore comprise mainly exotic (alien) invaders, weeds of cultivated lands, gardens and sports turf, and weeds of waterways. Although dealt with in the introductory chapters, indigenous species involved in bush encroachment and veld degradation are not covered in the main body of this book.

This is an excerpt from the guide: Problem plants and alien weeds of South Africa, by Clive Bromilow.

Grasses of the Kruger National Park and surrounding Bushveld