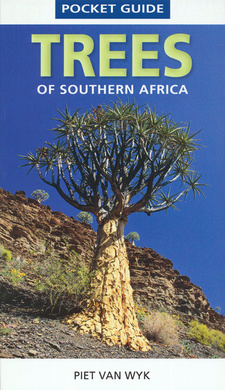 The purpose of Pocket Guide: Trees of Southern Africa by Braam van Wyk and Piet van Wyk is to encourage a desire among readers to become more knowledgeable about trees, particularly those of southern Africa, and their critical role in the environment.

Six so-called floristic kingdoms are recognized in the world. Two of them occur in southern Africa: the Cape Fynbos Kingdom, which roughly covers the winter-rainfall area of the Western Cape; and the Palaeotropic Kingdom, which covers nearly all of Africa. Seven well-marked, broadly defined vegetation zones (or biomes) can be distinguished in southern Africa. Based on plant life forms and climate, they are: savanna (bushveld), forest, desert, succulent Karoo, Nama-Karoo, grassland and fynbos. The largest of these areas, the savanna biome (also referred to as bushveld or woodland, including thicket) extends northwards from the Eastern Cape to cover parts of KwaZulu-Natal and Swaziland; most of Mpumalanga, Limpopo and the North West province; the Northern Cape, the northwestern Free State, Mozambique, Zimbabwe, Botswana, and northern and central Namibia. This region harbours most of the tree species on the subcontinent. By far the smallest blome, forest, occurs intermittently and sometimes in only extremely small patches along the eastern escarpment in South Africa, from the eastern parts of the Western Cape to the Soutpansberg in Limpopo. Several hundred kilometres further north, forest reappears in the eastern, mountainous area of Zimbabwe and the western area of Mozambique. The desert biome mainly corresponds with the Namib Desert in Namibia and extends in a relatively wide belt along the coast, northwards from Lüderitzbucht. Tree species that are able to tolerate the harsh environmental conditions of this region are very limited. Immediately south of the desert biome (and in a similar belt to the west of the western escarpment), the succulent Karoo biome can be found extending southwards into South Africa, at first along the coast and then on the inland side of the fynbos biome to the Little Karoo. Tree species are more numerous in this biome but still limited; they include some succulents, such as species of Aloe. Although insignificant in extent, the fynbos biome is, floristically, extremely rich and complex. The number of tree species in this biome is fairly limited; however, most tree species here are unique. The Nama-Karoo biome encompasses the central plateau of the Northern Cape, north of the southern mountain ranges. It extends east-west, Including Lesotho, the south-western Free State, the southern interior of Namibia and smaller parts in the Eastern Cape. As can be expected, only tree species that are drought-resistant and frost-tolerant can survive in this biome, which therefore excludes the bulk of those on the subcontinent. Despite higher rainfall, very low winter temperatures in the grassland biome have resulted in much the same situation as in the Nama-Karoo. This area is wedged between the savanna biome on the southern, eastern, northern and north-western sides and the Nama-Karoo biome on the south-western side, therefore covering large parts of Mpumalanga, Gauteng, the North West province, most of the Free State, Lesotho, western KwaZulu-Natal and sections of the Eastern Cape. Most tree species are limited to two biomes, namely forest and savanna. This is because the majority of plant species currently growing on the subcontinent started migrating southwards from Africa's tropical region at the end of the last Ice Age. (...)

This is an excerpt from the tree guide: Pocket Guide: Trees of Southern Africa, by Braam van Wyk and Piet van Wyk.

A Photographic Guide to Trees of Southern Africa