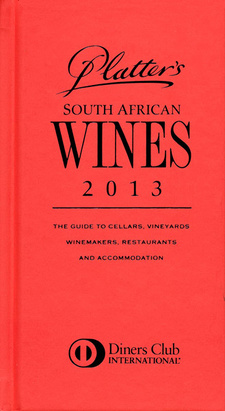 The following text is an excerpt from the editor's note (Philip van Zyl) to the wine guide Platter’s South African Wines 2013.

Regular readers will have noted that the most recent editions of this guide have focused on particular themes, 'Sustainability' in 2011 and Innovation'in 2012. For this book, the 33rd since inception in 1980, we were inspired by the oft-repeated phrase, that 'every bottle of wine has a tale to tell' to choose the theme 'Backstories'. The idea is to dig below the surface of South Africa's wine industry and reveal some of the untold narratives behind its cellars, people and brands. It's been a truly fascinating exercise, and a vivid reminder that South Africa's wine culture, generally considered'New World'and by implication 'young', is in fact more than three centuries old. For those who hold that the past Is passe, this is of course a complete irrelevance. But for those winelovers and hopefully soon-to-be-winelovers in Asia and other growth markets, for whom tradition and heritage in wine are real and meaningful, it's potentially hugely significant that winegrowing in this country stretches back more than 350 years. Not only that, but unlike most countries' wine chronicles, which begin with a vague 'Once upon a time', South Africa's commences, with the joyful exclamation 'Praise be to God!', on an actual day: February 2nd 1659. What a great backstory! The long tradition of individuals and families paying homage to the vine at the southern tip of Africa continues unbroken, and we're hopeful that our focus on backstories will help to convey something of the passion and dedication which today's winegrowers, like their predecessors, bring to their craft. Talking of backstories, a series of happy coincidences caused our path to intersect with that of a gifted young photographer from Cape Town's Khayelitsha neighbourhood, Teddy Sambu, whose acuity and imagination have transformed this edition's full-colour Photo Gallery into something truly special. Inspired by feedback from an image of his mother taken in boyhood with his first camera, and displayed some years later at her funeral, the enterprising Teddy disregarded the advice of a career counsellor and set himself up as a photographer under the banner Khaya Productions. With a canvas backdrop pegged to a barbed wire fence, Teddy had been photographing Learn-to-Earn graduates for R50 an A4 enlargement. Cape Town artist and photographer Athol Moult had founded a photography mentorship initiative Lightwarriors when serendipitously he discovered Teddy. More recently, Lightwarriors has been underpinned by a bursary from the African investment banking group, Imara Holdings. With Imara's backing and mentored by Athol, Teddy has been able to enrol at the Cape Town School of Photography and over a two-year scholarship period, is honing his craft and realising his enormous potential. Teddy entered our orbit when, over a plate of sushi, Athol (who is part of the Pitchblack team responsible for Platter's smartphone/tablet Apps) in passing mentioned the Imara Lightwarriors project and his delight about Imara coming on board with a substantial sponsorship. The rest, as they say in some of the best backstories, is history. Regarding the tastings for this edition, our aim and approach have remained unchanged, namely to taste, rate and describe as many as possible South African-made wines available during the currency of the book, both locally and overseas. (...)

This is an excerpt from the wine guide: Platter’s South African Wines 2013, by Philip van Zyl.

Harvest diaries is both a memoir and a reflection on a year for food and wine on an organic farm in South Africa.

Franschhoek Food showcases the attractions of one of the country's most important wine-growing regions and a mecca for gourmets.

Picturesque Winelands takes the reader on a visual journey through a charming stretch of South Africa's landscape.