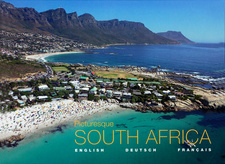 'Not for nothing is South Africa known as "A World in One Country", although some people go far enough to call it "A Country in Two Worlds". ' Gus Silber. Epigraph to Picturesque South Africa, by Sean Fraser.

Table Mountain: Visitors whisked to the summit of Table Mountain by cable car can enjoy panoramic views of the city and Robben Island, the former island-prison where Nelson Mandela was incarcerated. The eastern slopes of the mountain are home to the world-famous Kirstenbosch National Botanical Garden.

The Winelands: Although the Dutch planted the first grapevines, it was the arrival of French Huguenots in 1688 that allowed the local wine industry to flourish. Since then, South Africa has seen remarkable achievements, and its wines are acclaimed as some of the world's finest.

The West Coast: The rugged West Coast remains undeveloped beyond simple fishermen's cottages and is home to a diversity of flora, at its most spectacular during the spring bloom of Namaqualand, as well as a variety of birds such as the Cape gannet.

The Overberg: The southwestern Cape and its immediate hinterland are known as the Overberg, a largely rural but beautiful region whose coastal villages such as Arniston and Hermanus are famed for being great fishing and whale-watching destinations.

The Little Karoo: Route 62 winds across the craggy mountainscape of the Little Karoo, a dry and dusty but exceptionally scenic area that stretches from Robertson in the west to the ostrich-farming town of Oudtshoorn in the east.

This is an extract from Picturesque South Africa, by Sean Fraser.