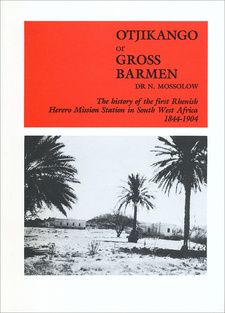 The following excerpt is taken from the introduction to the book Otjikango or Gross Barmen, by Nikolai Mossolow.

[...] During the drought of 1829/30, the nomadic Herero who lived north of the Swakop River crossed the Swakop and the Kuiseb and moved as far south as the Fish River in search of grazing. This represented a threat to the Red Nation, a Nam a tribe living in. the vicinity of Hatsamas, since their land stretched from the Nossob to the Kuiseb. Their chief, who at the same time acted as the paramount chief of all the Nama tribes, sent a delegation to Jonker, requesting him to come to their assistance against the Herero. As Jonker's people possessed firearms, it would be an easy matter for them to drive back the intruders. According to Sir James Edward Alexander, an English explorer who met Jonker at Niais in the area of Rehoboth in 1837, Jonker defeated the Herero in three bloody battles during 1835 and captured all their livestock. When he also succeeded in gaining the support of the Bergdama, his following increased to such an extent that he effectively ruled over a large part of the country. Towards the end of 1840 he settled at the hot springs of /Ai//Gams ("fire-water) or, as it is known by the Herero, Otjomuise ("place of smoke"), the present-day Klein Windhoek. He called the place Winter-hoek, probably in memory of his old home near the Winterberge. This name was eventually changed to Windhoek. As a progressive Oorlam, Jonker showed interest in the work of the missionaries. The Wesleyan Missionary Society had already established a mission station at Warmbad in 1834, and although the missionaries ministered only to that section of the Afrikaner people who had remained behind at the Orange River, they promised to also work among Jonker's people. However, nothing came of this promise initially, and Jonker therefore requested Sir James Alexander to approach the well-known German missionary of the London Missionary Society, the Rev. Schmelen at Kommagas, for a missionary on his behalf. Schmelen had founded the mission station at Bethanie in 1814, but had vacated it and moved to Kommagas in 1824. (The Bethanie mission station was only reestablished by the Rev. Knudsen of the Rhenish Mission Society in 1842.) On 4 December 1838, Schmelen wrote to the Rhenish Mission Society in Germany, which had been active in South Africa since 1830 and intended extending activities to the areas north of the Orange River. The Rev. Kleinschmidt was sent out in 1839, and this year may be considered to be the commencement of Rhenish mission work in South West Africa. The Rev. Carl Hugo Hahn, a German from the Baltics, was sent out as the second missionary. He was instructed to first go to Bethanie, and from there to proceed to Jonker Afrikaner and Walvis Bay. If in any way possible, he should also attempt to establish contact with the Herero. Hahn landed at Cape Town on 6 October 1841, and on the 21st December he was received by Father Schmelen at Kommagas. Kleinschmidt was ordained by Schmelen, assisted by Hahn and Knudsen, at Kommagas on 22 May 1842, and five days later he set out on his journey to Bethanien via Warmbad, a route which differed from the one Hahn was to follow. The party, which also included Kleinschmidt's wife and Jan Bam,4 the brother of Schmelen's second wife, arrived at their destination on 30 August 1842.  [...]

This is an excerpt from Otjikango or Gross Barmen, by Nikolai Mossolow.