Nomfanekiso, Who Paints at Night: The Art of Gladys Mgudlandlu, by Elza Miles 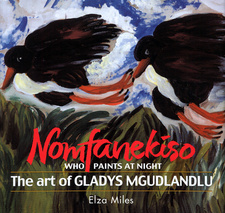 Nomfanekiso, Who Paints at Night: The Art of Gladys Mgudlandlu, by Elza Miles.

In Nomfanekiso, Who Paints at Night, art historian Elza Miles traces the development of this singular artist Gladys Mgudlandlu - from her early, meticulously detailed works, to her later works depicting urban scenes and simplification of shapes, enlivened with broad sweeping brushstrokes of colour.

At a time when apartheid permeated every aspect of South African life, Gladys Mgudlandlu, known by the people of Nyanga as 'the African queen', appeared on the Cape Town art scene. She held her first exhibition in the offices of the Liberal Party in 1961, a year after incidents of severe violence occurred due to enforced apartheid laws. The Nationalist government retaliated harshly against the nationwide campaign of civil disobedience. In Sharpeville, the police opened fire on demonstrators, killing sixty-nine; protesters left their passes at home and marched to the police station to present themselves for arrest; and some 30 000 objectors marched from Langa to Cape Town. Hereafter, the African National Congress (ANC) and the Pan Africanist Congress (PAC) were banned. Whereas Gladys Mgudlandlu never overtly used socio-political references in her work, the restrictive and dehumanising consequences of apartheid laws are evident in her scenes of Nyanga and Guguletu. Generally, she rendered aspects of her traditional Fingo background, paying tribute to folklore, the ancient craft of woodcarving and traditions. In her interpretation of these motifs, she can be regarded as a forerunner in the visual arts of the black consciousness movement, which gained momentum in South Africa during the 1970s.

In 1961, at the time of her debut, she was one of the first black South African artists to acknowledge an African leader by painting and exhibiting a portrait of Patrice Lumumba. On 30 June 1960, Lumumba, leader of the Congolese National Movement became prime minister of the Democratic Republic of the Congo, the first state in Africa to gain independence from colonial dominance. Of Mgudlandlu's realistic portrait of Lumumba, art critic Neville Dubow remarked: 'One realises that the subject is important, but as an artist her greatest asset is her freedom of expression. Where this is trammelled by the dictates of conventional and somewhat idealised portraiture, something dies. And the great thing about her spontaneous outpourings is that they are very much concerned with life. Unlike The World's headline, 'We're culture starved',2 which acknowledged Mgudlandlu's contribution to culture in South Africa, some black compatriots criticised her severely.

Bessie Head dismissed Mgudlandlu's technique compared to that of Ephraim Ngatane's as'childish scrawl', and called her 'an escapist' who ignored the injustices against blacks in the country where 'life and reality mean ninety-day detentions and banning orders and bang, bang, bang ....' George T. Kulati of Imvo Zabantsundu also had reservations. For him, Mgudlandlu's emphasis on the theme of 'rural life' was 'detrimental to her growth as an artist as she relentlessly creates traditional figures...'. He deplored the fact that she relied on memories of her Peddie childhood, instead of painting 'life around her in Cape Town'. He concluded that she 'could learn a lot from others as to variety in subject matter and flexibility in treatment'. For eleven years, from September 1961 to January 1972, Mgudlandlu's vibrant personality and pristine form of expressionism enchanted journalists, artists and art lovers. Art critics not only reviewed her exhibitions, they also bought her paintings. [...]

This is an excerpt from the book: Nomfanekiso, Who Paints at Night: The Art of Gladys Mgudlandlu, by Elza Miles.

Nomfanekiso, Who Paints at Night: The Art of Gladys Mgudlandlu

An overview of Gladys 'Nomfanekiso' Mgudlandlu's art, assessing her contribution to painting in South Africa.