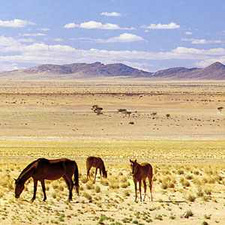 David Bristow introduces: Namibia is a huge and beautiful land, more in the sense of its grandeur than in its actual geographical area, although at over 800 000 square kilometres it is hardly small.

It is a land with seemingly nothing but huge open spaces dominated by surreal landscapes. With the exception of the Caprivi Strip's wetlands and lakes in the extreme northeast, Namibia is a thirstland; its rivers are more likely to flow with sand than with water. For the people that live in these arid regions, theirs is an arduous existence, but for the well-prepared visitor, it is a place of spectacular beauty and grandeur. Even in the harshest of environments, there is a surprising quantity of large game, as well as smaller animals and bizarre plants adapted to the punishing conditions. Look at a map - the exotic, tongue-tangling names let you know immediately that you are entering 'terra incognita' - adventure lies before you.

The physical landscape of the country comprises three main components: the coastal plain, the Great Escarpment, and the interior plateau. The entire coastal plain is a desert and semi-desert expanse, averaging about 100 kilometres in width - a universe of sand and sky. At the edge of this region is a chain of mountains and topographical steps that forms a barrier between it and the interior plateau of arid, but comparatively fertile, grasslands. This is ranching and game country, dominated by flat-topped umbrella thorn trees and tall, column-like termitaria.

Roughly in the centre of the country lies its capital city, Windhoek, with a population of a little over 100 000. In spite of its small size, Windhoek has something of a cosmopolitan air about it. Here, nineteenth century German architecture co-exists with twentieth century office blocks, and the vibrant colours of the Herero women's dress mingle with the more sombre attire of Windhoek businessmen.

Almost 300 kilometres to the west of Windhoek lies Swakopmund. This small town seems to have been gently picked up from the Bavarian countryside by some fantastical hand and, as a joke, deposited on Namibia's bleak coast. The road between Windhoek and Swakopmund, the two most popular tourist towns, conveniently divides the country into two manageable sections. The principal attraction of southern Namibia is the Namib Desert, most of which is protected within the Namib-Naukluft Park. South of the park lies the forbidden diamond area, or Sperrgebiet, which continues down to the Orange River; to the north the Skeleton Coast Park stretches up to the Angolan border. The country's entire coastline is, therefore, protected against human intrusion, making it unequalled in the world of conservation.

The Namib is the world's oldest and driest desert, its annual rainfall of less than 25 millimetres falling mostly in short cloudbursts. Some places may not feel the life-giving, cool caress of rain for decades at a time, but when it does rain, a sudden growth of silver grasses softens the rugged countryside like a dusting of cosmetic powder on a wrinkled, sun-cracked skin. Scant as the vegetation is, it supports a surprising variety of animal life, from tiny ants and beetles to large mammals - zebra, gemsbok and springbok, and their predators.

The arid climate is determined by the cold Benguela Current that courses up the continent's west coast. For millions of years, a stream of nutrient-rich, polar-chilled water from the Antarctic has surged along the Atlantic floor. When it reaches the African continental shelf, it is forced to the surface. The consequent cold surface-temperature of the sea here inhibits the formation of rain clouds, so cool coastal winds bear no rain to ease the land's thirst. […]

This is an extract from the book: Namibia. Beautiful Land, by David Bristow