My First Book of Namibian Snakes, by Francois Theart and Christo Buys 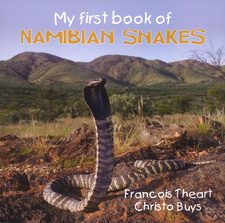 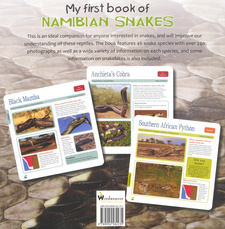 Reverse: My First Book of Namibian Snakes, by Francois Theart and Christo Buys.

My First Book of Namibian Snakes, by Francois Theart and Christo Buys is an ideal companion for anyone interested in snakes, and will improve our understanding of these reptiles.

Characteristics and Habits of Snake

Breathing: Snakes have a special adaptation for breathing. The windpipe reaches into the mouth and has a small flexible extension at its end - the glottis. The two nostrils are connected to the nose cavities, which lead to openings in the roof of the mouth. When the mouth is closed, the glottis slots into the opening in the roof of the mouth, and the snake breathes through its nostrils. When the mouth is open, the snake breathes directly through the glottis. Almost like a snorkel, this glottis can be stuck out the side of the mouth, allowing the snake to breathe while it has its mouth full of prey. A small piece of cartilage in the glottis vibrates when a snake forces out air through it, causing the hissing sound made by snakes.

Senses: Snakes can see well at close range, but the greater the distance, the less they can see. They smell in two ways. Snakes can smell through their noses just like humans do. However, they also use the forked tongue and the Jacobson's organ to "smell". This highly sensitive scent organ is located in the floor of the nose cavity and consists of two parts, each of which has a duct leading to the roof of the mouth, just in front of the breathing opening. The forked tongue picks up scent particles and conveys them to the openings of the ducts - the left part of the fork to the left duct, and the right part of the fork to the right duct. This helps the snake to determine direction. The organ processes the information and helps the snake to track prey, avoid the environment. As snakes have no external ear holes or eardrums, they cannot hear airborne noises. They are extremely sensitive to ground and other vibrations, though. A delicate bone attached to the quadrate bones which connect the lower jaw to the skull conducts the vibrations to the inner ear.

Reproduction: Snakes can reproduce in one of two ways - oviparous or viviparous. Oviparous snakes lay their eggs and leave them to hatch out at a later date. Most snake species in Namibia are oviparous. In viviparous snakes, the young develop inside the female and are born ready for life on their own. Young snakes, whether hatched out or born alive, are immediately active and quickly move off to fend for themselves. The young of venomous species have fully developed venom apparatus and can inflict a serious bite from the moment they are born.

Feeding: Snakes cannot chew or take a bite out of their prey, so they have to swallow it whole. As their prey is often bigger than their head is, they have developed specially adapted lower jaws. The left and right halves have not grown together, but are linked by elastic ligaments which allows them to spread apart. The lower jaw is attached to the skull by a freely moving bone plate, the quadrate bone, which enables the snake to open its mouth very wide. The different bones that make up the skull and snout are also not fixed, but loosely connected to allow limited movement, thus assisting in opening the mouth wider. Sharp, hooked teeth are found in both the upper and lower jaw and allow the snake to grip the prey and work it into the first part of the gullet, where the muscles take over to move the prey down to the stomach. [...]

My First Book of Namibian Snakes, by Francois Theart and Christo Buys

My First Book of Namibian Snakes

My First Book of Namibian Snakes features 46 snake species found in Namibia with over 240 photographs.