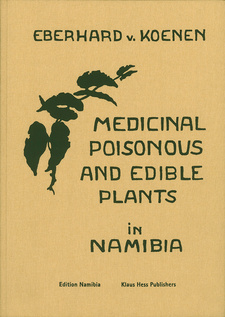 Originally published in German language, Medicinal, Poisonous, and Edible Plants in Namibia by Eberhard von Koenen, has been translated to English by Axel von Blottnitz, Regine Matern, Dr. Otto Leistner and Otto A. Schmidt. Twentyfive years of research, including the knowledge of a number of Namibian traditional healers, are documented here.

Dr. Eberhard von Koenen (1915-2012): Born in South West Africa on March 6, 1915, he and his family were deported to Germany for the remainder of World War I. In 1921 he went back to Africa, returning to Germany again in 1927 to attend 'Viktoria-Gymmasium' in Potsdam. After graduation in 1934, he served for a year in the German Reichswehr and returned to South West Africa at the end of 1935, where he worked as a farm manager. In the course of his work he became a great lover of nature. Together with most other male Germans from South West Africa, he was kept captive from 1940 to 1946 in an internment camp for civilians in South Africa. There a school and university organization was set up which found official recognition as the University of Andalusia. Eberhard von Koenen studied natural sciences. In the following years he frequently went to the Kaokoveld in the northwest of Namibia, where together with his wife he did botanic research in cooperation with the Senckenberg Museum in Frankfurt/ Main (Germany) as well as ethnological research. This work resulted in a well-received film about the Himba in 1953. More film work in East Asia and stays in Germany followed. In 1963 he came back to Namibia and founded the Gobabeb Desert Research Station. In 1964/65 he took a training course and examination as a physiotherapist and practiced in Windhoek. Later he studied homeopathy in South Africa and passed the prescribed examination. In 1974 he spent a year at Herdecke Community Hospital in Germany and started work on his first book on the 'Heil- und Giftpflanzen in Südwestafrika' (Medicinal and Poisonous Plants in South West Africa). This was published in 1977 and accepted as a doctoral thesis. He then opened a therapy office in Windhoek. In 1986 he retired to his farm Omburo near Omaruru. Father of four children, widower since 1999 and much respected in Namibia, he died on Farm Krumhoek on 14th August 2012.

The plant forms long shoots. Its long-petiolate leaves are hirsute, palmate, with serrate or dentate margins. Next to the leaves grow thorns. Greenish yellow flowers have long pedicels. The flowers are dioeciously distributed. The oval fruit, which bears conical spines, is yellow to orange and contains numerous seeds. The plant has a beet-like root. In the Okavango the root, which is believed to be poisonous, is pounded to a pulp and applied to snake bite wounds. If a cow or an ox is bitten, the animal is given one cupful of root extract, while part of the liquid is rubbed onto the bite area. [E.v.K. no. 140, sandy soil close to river, near Kayova, Okavango, 18/20 Ba.] The ripe fruit is eaten by the Bushmen. Even when still green, it is edible, if roasted. The tuber is pounded together with some water and taken as an antidote to arrow poison. [42] The fruit is nutritious and thirst-quenching. Eating too much fruit at a time should, however, be avoided, as it tends to irritate the mucous membrane of the mouth. [35] D: Owa, Gr, Gr-N, Otj, Oka, Go, Kar, Wh, Re, Gib.

This is an excerpt from Medicinal, Poisonous, and Edible Plants in Namibia, by Eberhard von Koenen.