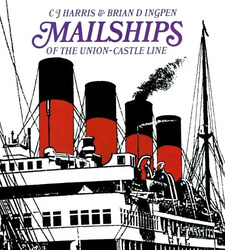 This book traces the colourful history of the mail service from its infancy to the poignant final departure of the Southampton Castle, the last mailship to leave South Africa. Mailships of the Union-Castle Line by C.J. Harris, Brian D. Ingpen and Peter Bilas is recommended as a demonstration of exhaustive enquiry and balanced judgement as well as for the deep nostalgia it evokes for a time that has passed.

Those who remember the lavender-hulled Union-Castle mailships with their black-topped, brilliant vermilion runnels cannot but reflect with deep nostalgia upon a way of life that will never return. Theirs is the memory of a time when travel was leisurely and enjoyable, and a holiday in itself; when elaborate meals were freshly prepared and brought to the table in a flurry of silver and white napery; when service was polite and efficient, and days were spent lazing under warm sunny skies, making new friends and having fun. Testimony to the pleasure those recollections evoke is the quantity of memorabilia and souvenirs that is still treasured in many homes in South Africa and Britain, each item calling to mind such cameos of life on board as the traditional Crossing the Line ceremony, the captain's cocktail party, fancy-dress competitions, deck sports and the bumper farewell dinner. And then there were the diving boys at Madeira and the buffeting in the notorious Bay of Biscay when, tongue in cheek, the captain would declare it to be the worst he had experienced in a lifetime at sea! Sailing day from Southampton provided its own special atmosphere, heralded by the arrival from London's Waterloo station of the 'boat train'. At Berth 104, anxious and excited - often bewildered - passengers would hasten to keep pace with porters who expertly wove their way through crowds in the shed and on to the quay, brushing past bustling deliverymen at every turn and florists' runners bearing farewell bouquets for departing friends. Once on board passengers were greeted by well-drilled reception staff who checked passage tickets and escorted the bearers to cabins that would be their home-from-home for the next two weeks. Prior to sailing, those travelling cabin (tourist) class queued in their dining saloon for place allocations for first or second sitting. Naturally, those in first class had their seating arrangements planned for them, while a few special passengers were invited by the captain -with an occasional prompt from head office - to share his table. At 16:00 precisely, with hatches battened down and everything secured, moorings were slipped and, to much waving and calling, the liner would draw slowly away from the quay to move sedately down Southampton Water. The pilot customarily disembarked off the Needles or, if the weather was bad, near the Nab Tower under the lee of the Isle of Wight. Then, with the engine room telegraph at 'full ahead', a slight tremble would run through the ship as the giant engines gradually picked up speed to the 21 knots required for the voyage of 5 978 nautical miles to Cape Town. On the other side of the equator, early risers in Cape Town might see on a Thursday the weekly mailship picking up her pilot from the coal-fired tender off the Table Bay breakwater. To the traditional log-book entry of 'Proceeded to master's orders and pilot's advice', the great liner would make its dignified way into the inner harbour, and commuters on their way to work would silently greet her. For many of the 700 or so passengers on board it would be their first visit to South Africa: some confident in the anticipation of an exciting holiday, some apprehensive about their future in a strange land. Others, native to the country, might be returning from holidays or business trips, and in each ship there was sure to be a contingent headed for the Rhodesias, Bechuanaland or Basutoland to begin a new life or take up postings in the British colonial service. Whatever their reasons for making the voyage, few would ever forget it, and in the thrill of arrival many would even forgo the camaraderie of the final breakfast in order to experience the breathtaking spectacle of Table Mountain in one of its many moods and the city spread out below. [...]

This is an excerpt from the book: Mailships of the Union-Castle Line, by C.J. Harris, Brian D. Ingpen and Peter Bilas.

Skeleton Coast. The dramatic rescue operation of the Dunedin Star

The ship Dunedin Star ran aground at the Skeleton Coast, followed by a dramatic rescue operation in 1942/1943.