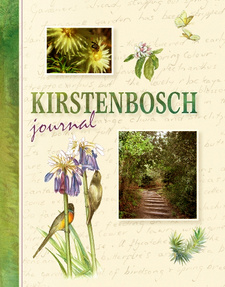 The National Botanic Gardens of South Africa at Kirstenbosch, which are topic of Daphne Mackie's beautiful journal, were a gift from Cecil Rhodes to the nation.

The National Botanic Gardens of South Africa at Kirstenbosch were a gift from Cecil Rhodes to the nation. In 1895, he purchased a completely unspoilt area of flowering plants, shrubs and trees on the eastern slopes of Table Mountain. It was a well-watered area, this is the wet side of the mountain, known as Kirstenbosch, apparently after J. F. Kirsten, an official of the former Dutch government of the Cape. The property covered the eastern slopes of the mountain from the bottom right to the highest point, Maclear's Beacon, and provided a varied habitat suited to a wide variety of plants. After the death of Rhodes in 1902, the slopes remained untouched until 1911, when they were selected as the site for a national botanical garden. This was proclaimed in 1913, and, under its first director, Professor Harold Pearson, Kirstenbosch was planned as a garden where the indigenous flora of Southern Africa
would be collected, preserved, propagated and studied. Many thousand species of plants of Southern Africa are cultivated in the garden, which covers 560 hectares. Kirstenbosch is a garden for all seasons, but spring is especially beautiful, with a brilliant display of flowers. In the garden is a lecture and exhibition hall, the offices of the Botanical Society of South Africa, hot houses, the Compton Herbarium, housing more than 200 000 specimens and a tea-room. At the springs of the Liesbeek River is an attractive sunken bath, known as Lady Anne Barnard's bath after the famous 19th. century letter-writer. According to popular belief a few decades ago, good luck follows any who throw coins into the bath, a share of luck certainly went to the men who periodically cleaned out this fountain. Kirstenbosch is open daily from morning to evening.

This is additional information on Daphne Mackie's Kirstenbosch Journal.

Decorated with African wild flowers, the Kirstenbosch Journal is designed as a gardening journal.

Adventure Trails In Kirstenbosch is a must-have companion for any young adventurer setting off into Cape Town’s much-loved garden.

Kirstenbosch: The most beautiful garden in Africa

Finely crafted text and lavishly illustrated with photographs and artworks tells history of Kirstenbosch, the most beautiful garden in Africa.

Coastal Gardening in South Africa is a guide to creating a thriving garden, whether you live on the arid Weskus, subtropical KwaZulu-Natal or anywhere inbetween.