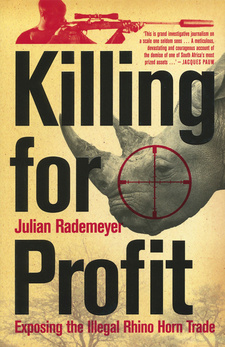 Killing for Profit, investigative journalist Julian Rademeyer gives is a compelling, meticulous and revelatory account of one of the world's most secretive trades. It exposes the poachers, gangsters, con men, mercenaries, killers, gunrunners, diplomats, government officials and crime bosses behind the slaughter and illegal rhino horn trade.

The sun is setting on a sweltering winter's day in the Laotian capital, Vientiane. Across a sea of concrete lies the sickly grey Mekong River and, beyond that, a mess of cellphone towers and radio antennas. I climb the stairs of a seedy riverfront bar that reeks of stale cigarettes and alcohol, order an ice-cold quart of Beerlao Lager and find a window seat. In the far corner, two sweaty tourists play a game of pool with a bar girl wearing impossibly tight white shorts and a fake smile. The place is starting to fill up with the late-afternoon crowd. Nine thousand kilometres from my home in South Africa, I'm nearing the end of a journey. My flight landed a few hours ago. In my backpack is a photograph, an address and the name of a company. In a folder on my laptop are scanned pages of documents detailing illegal shipments of tons of monkeys, snakes, pangolins, ivory tusks, lion bones and rhino horns. Somewhere out there is the man I'm looking for; the kingpin of an international wildlife-trafficking syndicate. I just have to find him. Three years ago, I could not have imagined being in that bar or writing this book or quitting my job to do so. Nor could I have imagined where this journey would take me, or the depths of the greed, folly, corruption and depravity that I would encounter. Rhinos are unique creatures. They're a link to a distant prehistoric past, a precious relic of our long-dead history. Ian Player will never forget his first sighting. It was sixty years ago. He was a young game ranger of twenty-five on an anti-poaching patrol. 'It was a misty morning,' he recalled recently. 'I was looking into a patch of bush when two white rhino came looming out of the mist, with steam rising from their flanks and their backs, and hundreds of stable flies hovering above them. Something within me was deeply touched by this primeval scene, and I had an intuitive flash that somehow my life would be bound up with these great prehistoric animals. There was sacredness about their presence. Along with a pioneering wildlife veterinarian, Dr Toni Harthoorn, Player is one of the men credited with saving the southern white rhino from extinction. In the 1960s, the few remaining southern white rhino were confined to the Hluhluwe-iMfolozi Game Reserve in South Africa's Natal province (later KwaZulu-Natal). Between 1961 and 1972, more than 1100 rhinos were translocated from there to national parks, private reserves and zoos across Africa, Europe, the United Kingdom, Canada and the United States in what was called Operation Rhino. Today, as a result of that intervention and the involvement of commercial game farmers, the number of southern white rhinos has increased tenfold, from just 1 800 in 1968 to nearly 19 000 today. Ninety-five per cent of them are found in South Africa. It is the country's greatest conservation success story. And one that is dangerously close to being unravelled. While rhino population growth rates in South Africa still exceed the rate at which the animals are being poached, the 'tipping point' is drawing nearer. (...)

This is an excerpt from the book: Killing for Profit:  Exposing the Illegal Rhino Horn Trade, by Julian Rademeyer.

tashas: Timeless Café Classics cookbook is a celebration of uncomplicated but delicious food, originating from South Africa and inspired by wonderful ingredients.

Along the Hunter's Path

A monumental, passionate work dealing with thoughts and hunting experiences in Namibia and other parts of Africa