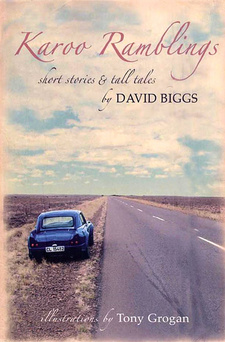 Karoo Ramblings by David Biggs and Tony Grogan should be compulsory reading for every city dweller and will bring tears to the eyes of South Africans in exile.

Many South Africans have, at one time or another, travelled the long, straight N1 highway that stretches from Cape Town all the way to Gauteng, the bustling economic heart of the country. For much of the route, the road runs through the great, endless plains of the grey Karoo. Small dusty towns like Colesberg, Noupoort, Hanover, Richmond, Beaufort West, Leeu-Gamka, Prince Albert Road and Laingsburg loom on the horizon and disappear behind us one by one. Each one seems to be little more than a cluster of tinroofed houses and a few shops gathered around the tall spire of the Dutch Reformed Church. To the passing motorist the Karoo appears to be a great emptiness - endless scrub country punctuated by the occasional windmill and a few black-headed dorper sheep or shaggy white angora goats. But, to those of us who have lived there, the Karoo is a source of endless fascination and delight. Here nature has had to adapt to all kinds of extreme conditions. Temperatures rise to over forty degrees Celsius in summer and drop to minus ten and lower in winter. Droughts sometimes last for years, leaving the earth parched and barren; then heavy thunderstorms lash the country and it erupts in a deafening chorus of tiny, clicking frogs. They call and mate and spawn in a frenzy of haste, for who knows when the next rain may fall? Where have they hidden during all those hot, dusty months? Farm dams shrink and disappear in the dry years and the clay turns to a hard, cracked crust where animal hooves scratch in vain for a little moisture. But the first rains soften the earth and allow families of dormant water turtles to emerge, reminding us that this dry land hides a host of hardy creatures far too tough to be destroyed by mere drought and heat.

The plants of the Karoo are small miracles in themselves, capable of incredible feats of rejuvenation. The famous Karoo bush, which sustains great Hocks of sheep and goats, might look like burned twigs in the dry times, but even then they provide nourishment all the way down their tough stems, until the animals appear to be chewing the very stones. When the rain comes the Karoo blooms again in a matter of days - some say hours. The people of this area are no less interesting than the plants and animals. Like the land itself they may appear dry and tough, but under the hard exterior there's a quiet sense of humour and sly wisdom. There must be if they are to survive the vagaries of this often harsh land. So, rush across the country to your holiday house in Cape Town if you must. You can pass through this desolate land in a day. Or you can take a little time to stop and listen to its silences, stare in amazement at its miracles and meet some of the people who live and love here. You might end up richer than before, because not all wealth is measured in money.

Fame and Faces: A story from Karoo Ramblings, by David Biggs and Tony Grogan

I suppose it's natural that a huge area like the Karoo, situated right in the middle of the country, should have its share of famous sons and daughters. And in little Karoo dorps they don't let you forget it. The Reverend Andrew Murray, who probably did more to spread Christianity in southern Africa than anybody else, left his mark in many a town across the country, starting in Cape Town, where his pale marble statue stands in front of the Groote Kerk, wagging an admonishing finger (now broken) at the naughty world. (It used to be tradition to place a condom on the great man's finger during the annual University of Cape Town rag float parade. That's no longer possible, which is probably a good thing.)

He is certainly well remembered in Graaff-Reinet, where he once occupied the parsonage. His son, who later became the Rev Charles Murray, laid out the pretty parsonage garden and planted what is now claimed to be the biggest grape vine in the whole world. Anybody who has visited Graaff-Reinet in the heat of mid-summer will understand that the most valued attribute of a grape vine in the Karoo is its shade, not its fruit. And, talking of grape vines, I have often thought that the Graaff-Reinet vine might be the biggest in the world, but the one on our family farm (appropriately called Grapevale) must certainly be one of the longest. Many old Karoo farmhouses were designed with a stoep or veranda running right round them to shade the walls.

When my grandfather bought Grapevale in 1923 there were some rather unkempt grape vines in the garden. One of these grew up the pergola over the front entrance of the house, acting as a stoep. As the years passed, the vine, a grape variety called Crystal, was encouraged by careful pruning to grow further and further from its original stem, and today it encircles the whole rambling house with its tendrils, providing welcome shade in summer. It was always Dad's personal task to prune the vine every winter. When he became too old to clamber up the pruning ladder, he employed one of the farm hands, Banzi Ntame, to do the actual pruning. Dad would sit in a folding chair under the vine and point with his walking stick at the spot where the next cut was to be made. Banzi would lop off the branch and Dad would point at the next spot.

After Dad died Banzi took over the whole job on his own. By "whole job", I mean he took on both roles. He set up a folding chair under the vine, sat in it and pointed at the branches overhead with a stick, then climbed up the ladder, cut off the branch and descended to sit in the chair and point at the next spot. When I asked him why he worked that way he simply said, "That's the way the oubaas and I always used to do it." You can see the Graaff-Reinet vine in Reinet House, which is the renamed parsonage and a national monument and museum in Murray Street (obviously named after old Andrew). Graaff-Reinet is interesting for a very different reason, too. A few kilometres outside the town, on the road to Middelburg, is a plain white-fronted building where some of the finest tequila in the world is distilled. (...)

This is an extract from the book: Karoo Ramblings, by David Biggs and Tony Grogan.

This is Cape Town

This is Cape Town shows the capital city of South Africa in all her glory, captured in high quality photographs.

The Karoo Cookbook is filled with delicious recipes that have been handed down from generation to generation.