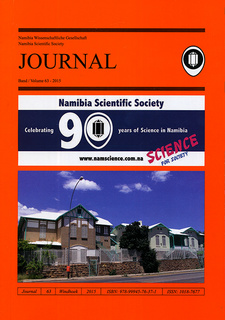 Had it not been for the former South West Africa Scientific Society, much of the country's heritage would have been lost. The intention of this Journal 63-2015 is to give recognition to individuals who gave all they had for the sake of science, research and the preservation of the country's heritage and environment within the today Namibia Scientific Society.

The foundation of the 'South West African Scientific Society' in 1925 was the culmination of a private initiative to meet the increasing need for an intellectual and scientific centre in the country, as no such institution existed at the time. The founding members were individuals who held influential positions in society and were determined to make a success of their idea. One of the aims of the Society was the creation of a forum that would facilitate scientific research and the exchange of scientific knowledge; another was to present scientific lectures which would then be published in an annual publication, the Journal. Membership increased steadily during the early years. Important components of the Society's activities were the library and the museum, which the Administration for South West Africa had handed to the Society for safekeeping. Owing to the harsh economic climate prevailing at the time, however, the Administration of South West Africa was in no position whatsoever to provide financial support. From the beginning and throughout its existence, the Society was shaped by individuals. During the 1930s and 1940s, for example, it was the determination of Dr H. H. G. Kreft, Dr Cecil Lemmer, Dr J. Trümpelmann, Mr Erich Zelle and Mr Willy Stritter, that carried the Society through. Due to a lack of funds, no publications appeared between 1932 and 1950. Although manuscripts were received and considered for publication, the printing had to be postponed from one year to the next. During World War II only the museum and the library were kept running by Messrs Stritter and Zelle, the latter acting as Curator, Librarian, President and Secretary. No Council Meetings or Annual General Meetings took place for several years. After the War, conditions improved due to an increase in the country's population, and the general economic resurgence finally enabled the Administration to make funds available on an annual basis. An energetic Council led by Dr J. S. Watt succeeded in reviving the Society. Lectures were again presented, and the Society served in an advisory capacity with regard to matters concerning the country in general (national monuments, nature conservation). Funds provided by the Administration allowed the appointment of Mr Zelle as full-time Curator and Librarian; this had a positive effect on visitor numbers and the public image of the Society. Then came more critical years: the Museum was taken over by the Administration (1957-58) and the library was almost lost. The financial means so urgently required at that stage were provided by two sources. Members approved an increase from R2 to R3 in the annual membership fees, and Dr Erich Lübbert enabled the Society to reposition itself in its activities by contributing towards the construction of a new building complex in which the Society could be housed, and by making funds available to allow the appointment of a permanent Secretary, General Manager and Publications Editor in the person of Dr Phil. Hans-Joachim Rust. In his presidential address of 1975 Dr Willy Arndt summarized the situation with the following words: "Without these two personalities the present position of the Society within the scientific world would not be imaginable. Dr Lubbert for his generous, continuous financial support, which was, after his death in 1963, continued by his family, and Dr Rust, our long-standing Secretary and Editor, for his untiring, creative activity deserve our sincere appreciation here" (Arndt 1975). The almost twenty years during which Dr Rust held the position of Secretary were prosperous years indeed for the Society. There was a boom in the publishing activity, including an annual Journal, a monthly Newsletter and many other publications; congresses and conferences were held, regular lectures presented, Study Groups formed, Local Branches and Museums founded, the library was rearranged, the exchange programme with institutions the world over extended considerably, and visiting researchers were accommodated. Dr Rust was assisted in his endeavours by dynamic Presidents in the persons of Mr Herbert Nöckler and Dr W. Arndt, who both served the Society in this position for many years. [...]

This is an excerpt from the Journal 63-2015 (Namibia Scientific Society), by Antje Otto et al.