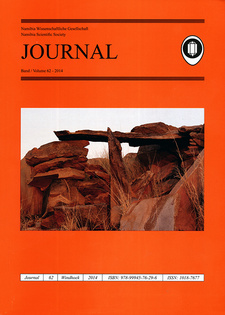 Sigrid Schmidt's 'Spirits: Some thoughts on ancient Damara folk belief' is one of five sientific contribution to Journal Volume 62-2014 published by the Namibia Scientific Society / Namibia Wissenschaftliche Gesellschaft. The study is based on her fieldwork in Namibia between 1960 and 1997 but tries to see the complex in relation to further Khoisan folk belief.

If your relationship with someone is bad, the old people cause sickness, running and talking in your sleep. If you talk to them it is okay. It is like if you go to an area without a gift there will be trouble. Like the place on the road to Purros. There are certain areas of Sesfontein where you must talk to people and bring things. If you go somewhere and come back the elders spit water at you and ask the ancestors to welcome you back. (The Pastor of Sesfontein's descriptions of old Damara beliefs, quoted in Low 2008, 241). The original inhabitants of southern Africa are the Khoisan peoples. They are the various Bushman (San) groups and the Khoekhoegowab-speakers (Nama, Damara and Haillom), the peoples formerly living in South Africa, Namibia and Botswana as well as Southern Angola and Zimbabwe. Since the early settlers came into contact with these peoples the Europeans had tried to learn about their religions. The results during the first centuries were meagre, mainly because the Europeans were not able to understand and appreciate a different concept of belief. It was only in the last part of the 19th century that more detailed and sensitive studies began. The main focus of interest were, of course, the deities. These deities showed a perplexing diversification. A striking difference, for instance, was that acccording to many groups there was one supreme being but according to other groups, like the !Xun in northern Namibia, there was a second deity in addition. While the supreme deity was regarded as the supporter of life the second deity rather was connected with death. Yet a sharp opposition like the Christian dualism of God - Devil generally did not exist (Schapera 1930, 177-195, 376-389; Thurner 1983; Barnard 1992, 251-264; Guenther 1999, 58-94). This little study intends to investigate a field which is closely related to the ancient deities but has not been given special attention: the spirits of the dead. Their part in the old concepts of belief has been underrated. I intend to devote some thoughts to the spirits told about by the Damara of Namibia. My aim is to give a short introduction to the field and, mainly based on my fieldnotes, try to pave the way for an understanding of the various phenomena. As the Damara did not live isolated I shall occasionally refer to similar or contrasting ideas of other Khoisan peoples. Before starting the discussion the term "spirits" should be defined at least briefly. This is as difficult as a precise definition of Khoisan deities. We can recognize broad categories but have to allow for some overlap as everywhere in folk belief. Generally spirits are distinguished from ghosts. Spirits are the invisible representations of anonymous dead, usually thought of in an unspecified number. Though the people speak of them, like in the quotation above, as "the old people", sometimes even their "forefathers", the spirits are not individual members of the family, are no ancestors, but rather are, as Willoughby called them in his discussion of a North-east Angolaland example, "kinless spirits of the wilderness" (Willoughby 1928, 262). They are called Wgamagu or Wgduagu, (m. pi.) or Wgaman (com. pi.), in Afrikaans geeste. This term is the plural form of the name of a or the deity, IIGamab or IIGauab. A further discussion therefore first requires a short look at these deities and the ancient religion.

1. IIGamab, "the old people" and the curing rites
a) Heinrich Vedder

We owe the most detailed account of the religious traditions of the Damara to Heinrich Vedder (1923, 97-142). Brigitte Lau tried to discredit his work by maintaining that he "collected his material from a very remote, marginal and impoverished little group in the Otavi Mountains on which he stumbled in the 1920's" (Brigitte Lau 1979, 2) and thereby influenced English-speaking readers who were not able to consult the German original. [...]

This is an excerpt from the Journal 62-2014 (Namibia Scientific Society / Namibia Wissenschaftliche Gesellschaft), by Sigrid Schmidt et al.

A scientific series published by the Namibia Scientific Society, this is the Journal Volume 62 dating from 2014.

Security and democracy in Southern Africa

Examines the relationship between democratisation, character of democracy and its deficits, and national security practices and perceptions of eleven southern African states.