Jock of the bushveld, by Phillida Brooke Simons and Angus MacBride 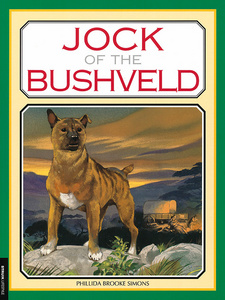 Sir Percy Fitzpatrick's classic Jock of the bushveld as retold by Phillida Brooke Simons and and illustrated by Angus MacBride.

No one could have called Jess beautiful. She was a bull terrier with a dull brindled coat marked with shadowy grey and black stripes. Her eyes were small and cross-looking and she had restless, twitching ears. She was bad-tempered, too, and most unsociable. But to her master she was as brave and faithful a dog as ever lived. Jess was the only dog at our camp. She belonged to my friend, Ted, and she never left his side, day or night. He was lucky to have her, for good dogs were difficult to find on the goldfields. I tried to get one for myself before I joined the wagons going down to Dela-goa Bay but I had no success. I wanted a dog to be my companion and to go out hunting with me, for game was still plentiful then and we always needed meat for our camp cooking-pot. Every day the other men brought back something they had shot. It might be a duiker or reedbuck or a wild pig, but I always seemed to return empty-handed. Yes, what I wanted was a good hunting dog. I needed a dog with sense and strength and plenty of courage - a dog like Jess. She was certainly not a favourite among us but we could not help respecting her, especially after that day at Ship Mountain. Ship Mountain was a pleasant place on the Bushveld where we had rested during the heat of the day. At sundown, just as we were preparing to leave on our evening trek, some wagons passed by. Ted knew the owner so he decided to go ahead with them, planning to meet us at the next outspan. He called to Jess as he jumped onto the wagon. Immediately she ran out to him from a patch of long grass where she had been lying. But when she saw Ted moving off with the other wagons she did not follow him. Instead, she sat down in the middle of the road, looking after her master with an anxious, puzzled expression. The wagons disappeared and Jess went back to her grass patch. A moment later she returned, whimpering softly and obviously worried. She ran restlessly to and fro between the long grass and the road all the time wt were inspanning. It seemed that she could not make up her mind whether to follow or to stay. The last and most important things to be loaded onto the wagons were our guns and water barrel. They had been left close to the place where Jess was lying and when we were almost ready to leave, one of the Zulu wagon drivers went to collect them. Within a few moments he returned to us at the wagons in a state of great excitement. 'Ow!' he exclaimed. 'That dog Jess! I think she's mad! Every time I go near the guns she tries to bite me!' And he refused to go back. There was nothing for it but to collect the guns and water barrel ourselves. We walked towards the grass patch and when we were a short way off Jess appeared. She was crouching low as if she were about to spring at us. Her ears were laid back flat, her teeth were bared and, as we watched, the hair along her back slowly began to bristle. There was no doubt about it, Jess did not want any of us near her. [...]

This is an excerpt from the book: Jock of the bushveld, by Phillida Brooke Simons and Angus MacBride.

The Man with the Black Dog. A true modern-day Jock of the Bushveld

The Man with the Black Dog is permeated by the same love and empathy that made Jock of the Bushveld such a classic.