In a Different Time. The Inside Story Of The Delmas Four, by Peter Harris 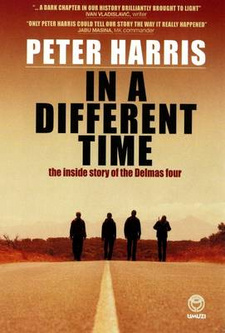 In a Different Time: The Inside Story Of The Delmas Four by Peter Harris is written with the compulsion of a thriller, this extraordinary, true story of an MK hit squad fighting a guerrilla war in the 1980s will have readers turning the pages through to the unexpected gut-wrenching twist at the end.

It is April 1987. I'm on the Pretoria highway in the fast lane, ears pinned back, being pulled along in the slipstream of a seventy-seater school bus going like hell, the children clustered up against the large back window, pulling faces at me, smiling and waving. I am not enjoying myself. This morning the phone rang at five o'clock. Not a good time for me. I come up from a heavy sleep, grope clumsily for the instrument on the bedside table. Alongside me my wife Caroline turns away from the noise and pulls at the duvet. She's a journalist. I'm a lawyer. Because of our jobs the phone rings at all hours of the day and night. It's something we never get used to. My voice is a croak when I answer. Is that Peter Harris?' says someone I don't recognise. I'm afraid so,' I reply. This call is from Lusaka. Please visit Jabu Masina, Ting Ting Masango, Neo Potsane and Joseph Makhura in Pretoria Central Maximum Security, they need to see you urgently. Please see what you can do to assist them.' I have notepaper and a pen beside the phone. I scribble down the names. 'No problem,' I say, but the caller has cut the connection. 'What is it?' mumbles Caroline. 'That's what I've got to find out,' I say, heading for the bathroom. Maximum Security means 'political' nothing else. Serial killers, sadistic rapists, wild psychotics, mass murderers never make it close to Maximum Security. Maximum Security is for the 'politicals', my clients. I've got the easy job. They get charged, I represent them, and then they go to jail, usually for lengthy periods. Then I visit them. In places like Pretoria Central or the 'snakepit' in Kroonstad, on Robben Island or at Diepkloof prison, otherwise known as 'Sun City' after the fantasy pleasure dome built by Sol Kerzner in Bop. Bophuthatswana to the apartheid architects. Are they guilty? Well, yes, they are ... mostly. At least the ones who end up in those kinds of places are, if guilty is the right word. Sadly, I suppose, I don't have that many innocent clients. Not many lawyers do. Worse still, my clients are generally accused of the big things like treason, murder, conspiracy, trying to overthrow the State, sabotage, crimes which carry the death sentence. This is why these people are hard to defend, particularly if they are, in fact, guilty. Even worse, my clients often don't want to deny the charges against them; they're not interested in their own innocence. This is in stark contrast to most people charged with criminal offences. Most people protest their innocence, even in the face of overwhelming evidence. Murderers holding a smoking gun proclaim their innocence. Try it for yourself: walk - or run - through your average prison on any day of the week and ask the prisoners convicted of criminal offences which of them are innocent and were wrongly convicted. Every hand will go up. What distinguishes my clients is that they are politicals. Ask them if they intended to overthrow the State and you will get a strong yes. Unfortunately, though, even if they are separated from the criminals, they still end up in the same place, prison. This is depressing for a lawyer, demoralising. [...]

This is an excerpt from the book: In a Different Time. The Inside Story Of The Delmas Four, by Peter Harris.

Birth. The Conspiracy to Stop the '94 Election

Birth, The Conspiracy to Stop the '94 Election is about a vulnerable moment. It is about a nation staring into the abyss as it steps out to determine its future.