How on Earth?, by Terence McCarthy 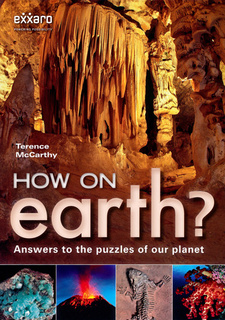 How on Earth?, by Terence McCarthy.

Professor Terence McCarthy with 'How on Earth?', opens the door to normally inimaginable processes, changes and incidences of Earth history.

Perhaps the most important attributes that set humans apart from other animals are our ability to reason, to articulate our thoughts and to convey them to others. Humans are also naturally curious. Successive generations therefore did not have to rediscover knowledge, but learned from their elders who passed on the cumulative knowledge. One can imagine a scene, no doubt repeated in societies across the globe over many millennia, of a community sitting around a fire in the evening listening to the elders' discou rse on the world, drawing on knowledge passed down over many generations. Perhaps the elders responded to questions from younger tribesmen and women, questions arising from their curiosity and from their wish to make sense of the world around them. Such traditions are still with us. The advent of writing and the spread of literacy have resulted in the replacement of the tribal elder by books and other media, but the urge to understand and make sense of the world is still very much alive. Even today, we all have questions about our world, and I think we all still secretly wish we had friendly elders we could ask. This book is very much a product of that tradition. The rapid expansion of research in earth sciences and astronomy in the latter half of the twentieth century has brought about a radical transformation of our understanding of the Earth, how it works and how it has changed over the millennia. Although the questions posed in this book are focused primarily in the earth sciences, the answers are drawn from a wide range of disciplines, because such is the complex nature of the world. Every effort has been made to keep the answers short and concise and to strip away the mists of scientific jargon, making them accessible to all. Sources for further reading have been deliberately omitted, because although many excellent works exist, they are unlikely to be readily available in local libraries. My advice to readers seeking more information is to use the internet. Google and Google Scholar are especially useful. Terence McCarthy [...]

THE EARTH AND ITS ENVIRONMENT
What is the Sun made of?
What makes the Sun shine - and how long will it last?
When and how did the Earth form?
Where does Earth's water come from?
How was the Earth first weighed?
Why is the centre of the Earth hot?
How did the Moon form?
How stable is the Earth's magnetic field?
How are rocks dated?
EARTH'S CHANGING FACE
Has a day always lasted 24 hours?
Were Africa and South America once joined?
Why is the Earth divided into continents and oceans?
How did Earth's oceans and continents form?
How do mountains form?
Why are the highest mountain peaks in the Himalayan range?
How are volcanoes formed?
Why do so few serious earthquakes occur in South Africa?
Will Africa's Rift Valley fragment the continent?
How have the Earth's continents survived perpetual erosion?
Could Earth be struck by a meteorite?
THE EARTH'S ATMOSPHERE AND OCEANS
Has the Earth's atmosphere always been as it is now?
How variable has Earth's climate been in the past?
What are the natural causes of climate change?
What causes sea level to change?
What caused the 2004 tsunami?
Why is sea water salty?
THE EARTH'S MINERALS
How does uranium give us energy?
Why do some organic materials decay into coal and others into oil and gas?
Why are so many oil and gas fields located offshore?
When will essential minerals run out?
Why is South Africa so rich in precious metals?
Where do diamonds come from?
Why is southern Africa so rich in diamonds?
Do 'intermediate' forms of carbon exist between graphite and diamond?
What is the origin of South Africa's west coast diamonds?
How do gold nuggets form?
Are mineral deposits forming today?
What gives gemstones their colour?
How do amethysts form inside a geode?
How do agates form?
Could minerals on the sea bed ever be mined?
Why is Table Mountain flat?
What causes hot springs?
What is pumice and why is it found on local beaches?
How has the Karoo changed over time?
Why are there glacial deposits in South Africa?
Have there ever been volcanoes in southern Africa?
How did the last Ice Age affect southern Africa?
How has the South African landscape changed over time?
What gives valleys their different shapes?
How are salt pans formed?
How do rock columns form?
What causes sinkholes?
How are rivers formed?
Why is there water under ground?
Why is some river water tea coloured?
How are sand ripples preserved in ancient rocks?
How do caves, stalactites and stalagmites form?
What is the topography of the sea bed?
How did South Africa's steep eastern escarpment form?
Why is the drainage network of Southern Africa so asymmetrical?
Why are some rock strata inclined when others are horizontal?
When did life first appear on Earth?
Has the diversity and complexity of life changed over time?
What are fossils?
How secure is Darwin's theory of evolution?
From where did humans originate?
What caused mass extinctions?
What is the Sixth Extinction?
What is mankind's impact on Earth?
What is the importance of the Karoo fossils?
Why are fossilized sea shells sometimes found on mountain tops?
THE WORLD AROUND US
LIFE
GLOSSARY
INDEX

This is an excerpt from the book: How on Earth?, by Terence McCarthy.

How on Earth? sets out to answer puzzles in nature and the environment of Africa and the world.

The Story of Earth and Life. A southern African perspective on a 4.6-billion-year journey

The Story of Earth and Life explaines southern African scientific knowledge in a fascinating and easy-to-understand way.