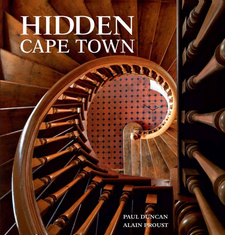 The title, Hidden Cape Town, could imply that the places you see featured are intentionally hidden from view In most cases, as Paul Duncan and Alain Proust discovered, this simply isn't the case. Many are not inaccessible either; it's just that as everybody rushes past getting on with life, there isn't much thought for what lies beyond a familiar entrance.

Welgelegen is one of the loveliest houses in Cape Town, from the outside. A romantic, asymmetrical cluster of gables and windows, columns and staircases, it was built amongst the trees in the grounds of Groote Schuur by Herbert Baker in 1899. In the foothills of Devil's Peak, its location is spectacular: 'Nature's handiwork is on a larger scale ... in South Africa which the Arch-Architect has designed so essentially in the grand manner,' Baker said in The Architectural Needs of South Africa. 'Here the landscape is ... so vast and grand in its general features that the design and disposition of buildings must be conceived on a monumental scale to be in harmony with the work of nature.' While not exactly monumental, Welgelegen, on its slope between the M3 freeway and Main Road in Mowbray still displays the genius loci Baker intended. The house is one of the most characteristic of Baker's Cape Revival-style dwellings. Cecil Rhodes bought it for his old friend, John Blades Currey, because he'd been so good to him in his Kimberley days, and it subsequently became part of the Groote Schuur Estate. Currey, the man who chose the name Kimberley for the nascent diamond-fields town, was appointed in 1884 as manager of a Kimberley land-owning company and when, some fifteen years later, the company was absorbed by De Beers Consolidated Mines, Rhodes, as chairman of De Beers, invited Currey to become steward of his Cape Town estate. Welgelegen was given to him to live in. Its interiors showed Baker at his Arts and Crafts best. They survived until 1979, when the university took over the property following the death of its last occupant, Winifred, John Blades Currey's daughter, at 100 years of age. Now, unfortunately they no longer exist. If you want to know what the home would have looked like, you'd probably have to visit Westminster in the Free State, which Baker designed early in the 20th century for the Duke of Westminster. It's one of the last of his homesteads to survive intact, much of the furniture was designed by Baker himself- and furnished just as he intended. Or you could pop into Welgelegen itself and ask to see the three paintings by English painter, James Durden (1878-1964), which survive there: The Dining Room and The Open Door being the most interesting. Exhibited at the Royal Academy in London in 1934, these are a record of their time and they're worth examining, if only to establish in your mind's eye what should never have been allowed to happen.

This is an excerpt from the book: Hidden Cape Town, by Paul Duncan and Alain Proust.